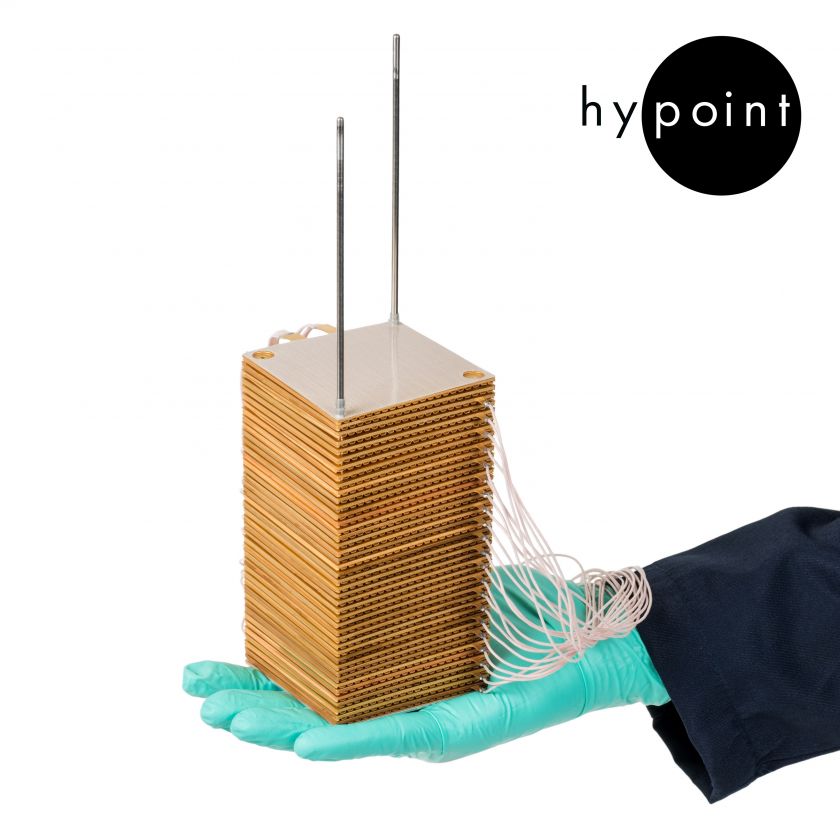 HyPoint, the company developing zero-carbon emission hydrogen fuel cell systems for aviation and urban air mobility, today unveiled the first operable prototype of its breakthrough turbo air-cooled hydrogen fuel cell system. The NASA award-winning fuel cell technology, developed by an international team of engineers, delivers an unprecedented combination of specific power and energy density and has passed key validation testing to prove its technical viability. Full-scale versions, which are expected to begin shipping in 2022, will drive the commercial development of zero-emission e-aircraft, eVTOL, and urban air mobility vehicles, and serve an important role in the global effort to curb carbon emissions.
The arrival of zero-emission aviation has been hindered by the energy density limitations of lithium-ion batteries and the specific power limitations of hydrogen fuel cells. Testing has shown that HyPoint’s turbo air-cooled hydrogen fuel cell system will be able to achieve up to 2,000 watts per kilogram of specific power, which is more than triple the power-to-weight ratio of traditional hydrogen fuel cells systems. It will also boast up to 1,500 watt-hours per kilogram of energy density, enabling longer-distance journeys. By addressing these core technological barriers, HyPoint will cut years off commercial delivery timelines for hydrogen aircraft and unlock the emerging hydrogen aviation market, which is expected to be valued at more than $27 billion in 2030 and at least $174 billion by 2040, according to Allied Market Research.
HyPoint’s revolutionary approach utilizes compressed air for both cooling and oxygen supply to deliver a high-temperature (HTPEM) fuel cell system that is three times lighter than comparable liquid-cooled low-temperature (LTPEM) fuel cell systems. It also leverages a number of technical innovations including lightweight bipolar plates and a highly conductive, corrosion-resistant coating in order to radically outperform existing systems. As a result, HyPoint can deliver up to a 50% reduction in total cost of ownership for aircraft makers and empower them to create practical, cost-effective zero-emission vehicles. HyPoint’s approach is detailed in a newly-released white paper, which can be found at bit.ly/HyPoint2021.
“Last year we proved that hydrogen-electric aircraft are not only possible but inevitable — and now we are working hard to get a 100-seat zero-emission aircraft in the skies before 2030,” said Val Miftakhov, founder and CEO of ZeroAvia. In September, ZeroAvia became the first company to successfully complete a hydrogen-electric passenger aircraft flight. It went on to raise $21.4 million from Amazon, Shell, and a Bill Gates-backed fund. “The reality is that hydrogen fuel cells are the technological driver behind e-aircraft, and we are working closely with the team at HyPoint to test their systems for potential integration into future ZeroAvia aircraft.”
HyPoint also announced that it will begin work with the U.S. Department of Energy’s National Renewable Energy Laboratory (NREL) to further test and validate its hydrogen fuel cell technology. NREL’s hydrogen and fuel cell research and development focuses on developing, integrating, and demonstrating hydrogen production and delivery, hydrogen storage, and fuel cell technologies for transportation, stationary, and portable applications. Projects range from fundamental research to overcome technical barriers, manufacturing process improvement to enable high-volume fuel cell production, systems analysis to identify the most promising commercialization pathways, and market transformation to support early market deployments.
“This functional prototype brings us one step closer to our vision of delivering efficient and cost-effective zero-carbon emission fuel cell technology to the aviation industry, which is expected to contribute up to a quarter of the world’s greenhouse gas emissions by 2050 if left unchecked,” said Dr. Alex Ivanenko, founder and CEO of HyPoint. “The prototype has passed a number of subsystem tests that strongly suggest that our patented technology and unique approach works — and we’re excited to use NREL’s state-of-the-art testing facilities to further validate our system. Moreover, we’re thrilled to be a part of the emerging hydrogen economy, which seeks to replace harmful fossil fuels with hydrogen, the universe’s most abundant energy source.”
In December 2020, HyPoint was named a winner of NASA’s iTech Initiative, in which inventive technologies were ranked based on criteria that included technical viability, likely impact on future space exploration, benefits to humanity, and commercialization potential. HyPoint’s aeronautic applications — including eVTOLs, UAVs, PAVs, and electric aircraft — were considered to be especially innovative.
“Over the past several months, interest in hydrogen companies has reached a fevered pitch, in part because the world is waking up to hydrogen as a clean, reliable, and abundant fuel source. The hydrogen economy is here,” said Jordan Levy, managing partner at SoftBank Capital NY and founding partner of Seed Capital Partners, an early-stage venture capital fund. “The team at HyPoint is among the world’s most experienced in the field of hydrogen fuel cell technology and, as an investor, we’re thrilled to be a part of HyPoint’s early success. We look forward to following their continued momentum.”
About HyPoint
HyPoint is pioneering next-generation hydrogen fuel cell systems for aviation, aeronautics, and urban air mobility. The company’s flagship turbo air-cooled hydrogen HTPEM fuel cell system offers zero carbon emissions and game-changing energy performance as a result of patented innovations including lightweight bipolar plates, a highly-conductive corrosion-resistant coating, and an industry-first air cooling and oxygen supply system. Together these technologies enable a lightweight, climate-independent, extended-lifespan fuel system and dramatically increase operational time and utilization rate while decreasing total cost of ownership by as much as 50%. The company was founded in Silicon Valley in 2019 and is backed by leading venture capital firms and individual investors. To learn more, please visit hypoint.com.
—
Press contact:
Aaron Endré
Endré Communications
aaron@aaronendre.com
Source: HyPoint, Inc.