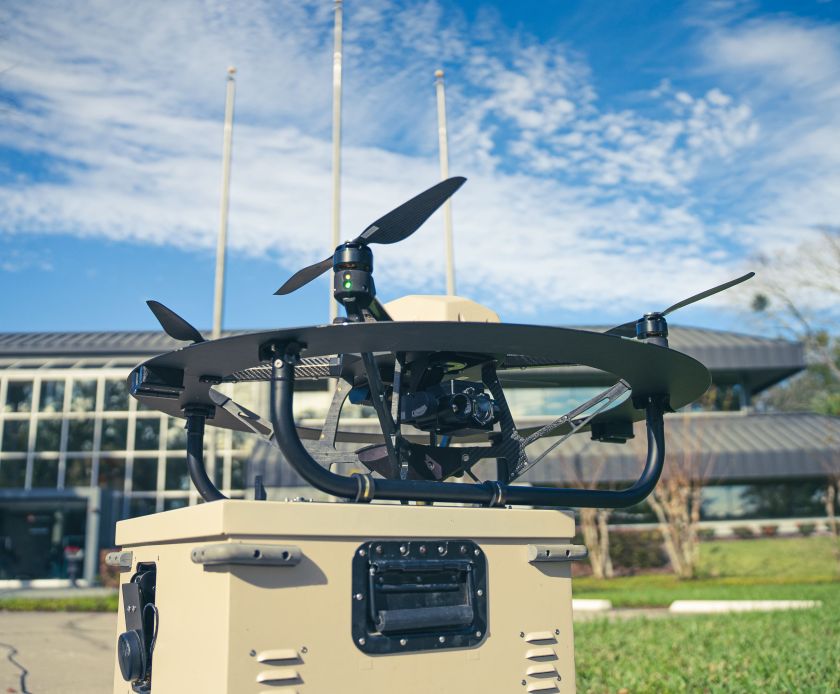 Hoverfly Technologies Inc. announced today that it has been issued U.S. Patent No. 11,518,542 from the U.S. Patent Office for the “Landing Structure for an Unmanned Aerial Vehicle.” Hoverfly has been the leader in the tethered drone industry since its inception, and its unmanned aerial vehicles (UAVs) have evolved year after year.
One of the largest concerns with UAVs has been determining where the system will land when it is commanded to land or power is interrupted. Free-flying drones have the concern of battery running out, but tethered systems operate differently. Because power and data are transmitted through the tether to the aircraft, tethered UAVs can fly persistently for hours, days, or weeks at a time. All the while, there remain questions on where the tethered system will land when commanded. Hoverfly tethered aircraft possess proprietary landing technology that allows the aircraft to land in its landing ring without fail. The patent protects our landing ring technology for the tethered UAV, allowing for takeoff and landing in the defined precision landing nest.
Hoverfly tethered systems first began with a landing platform, but quickly realized that a redesign was necessary. Requirements from end users and discussions with key decision makers challenged Hoverfly to create a much more compact system. The priority was to integrate on to manned and unmanned vehicles or vessels, and the form factor of the tethered platform had to be much smaller. The compact tethered system with the patented landing ring is second to none in terms of size and capability.
Hoverfly tethered UAVs, often referred to as the Variable Height Antenna (VHA), are multi-purpose UAVs with versatile capabilities. They can be found integrated on both manned and unmanned vehicles or vessels in defense, security, and public safety industries across the globe.
Al Ducharme, co-founder and Chief Technology Officer, explains, “The driving force of this evolution came from the end users. We wanted to make a more compact system that was easily transportable and able to integrate on a variety of platforms. I’m proud of our engineering team for providing a novel solution to our customer’s needs.”
Source: Hoverfly Technologies, Inc.