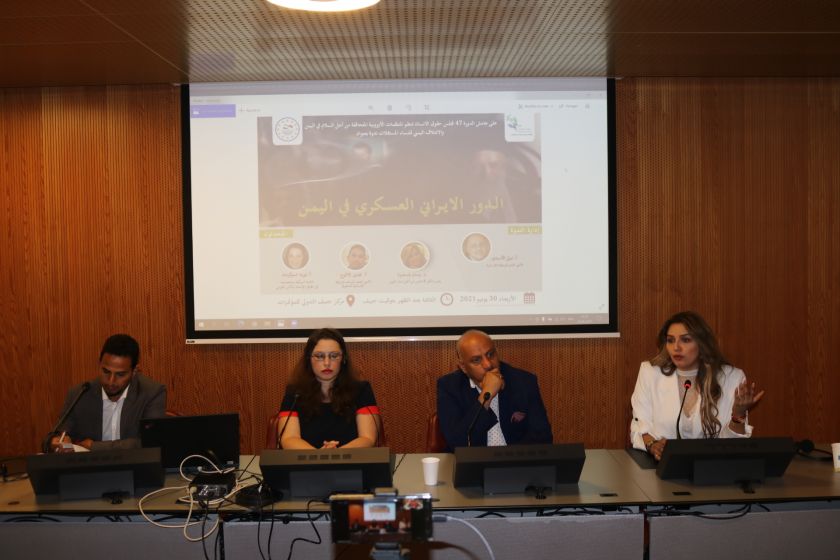 The Washington Outsider is a media source focused on covering niche foreign policy and security news from around the world. (www.theWO.us)
According to Irina Tsukerman, Human Rights Lawyer and Editor-in-Chief of the Washington Outsider, who spoke in Geneva on the sidelines of the 47th UNHRC session, Wesam Basindowah, the head of the March 8th Women’s Bloc, described Iran’s successful penetration of Arab states taking advantage of the Arab Spring and consequent chaos. Since 2011, there have been educational missions and the recruitment of young people to Tehran, and media and training channels have been opened in Iran, Iraq and Lebanon, such as the Lebanese Al-Mayadeen channel.
She mentioned the stage of Iran financing its arms in Yemen with money, weapons, and the operations of training fighters through courses in Lebanon through Hezbollah, transferring Hezbollah’s technical expertise to Yemen, and finally the arrival of the Iranian operative Erloa, who arrived in Sana’a with the title of Iran’s Ambassador. Iran’s goal in the region is to displace Mecca and KSA’s Custodianship of the Two Holy Mosques with Qom and the Islamic Revolution, explained The Washington Outsider Editor-in-Chief Irina Tsukerman, speaking at the Yemen Coalition of Independent Women seminar on June 28th. Shi’a Muslims are a minority in the region, and at this stage cannot easily challenge KSA’s religious importance either through combat or through ideological imposition.
However, by building up proxies such as Hezbollah, Hamas, and Houthis, the regime can recruit followers and raise generations of dedicated revolutionaries and ideological dogmatics. For that reason, the strategy of employing child soldiers is common to all of Iran’s proxies and partners. The children are targeted on the basis of their family backgrounds; villages known for their opposition to Houthis are raided and children are abducted in mass in order to pacify and gain control over these regions. Houthis also offer financial incentives and privileges to loyal clans who willingly allow children – both boys – and girls to be indoctrinated in schools, mosques, and military summer camps. Finally, the Houthis entice children with drugs and brainwash them to achieve unquestioning loyalty and to break down their ties with families and their own cultures. Additionally, Houthis, modeled after Hezbollah, also serve the role of destabilizing the region and weakening Iran’s adversary Saudi Arabia.
The drugs, which Houthis receive through border smuggling as well as contraband in shipments from Iran, are spread through various creative methods to the neighboring Saudi Arabia, with the hope of demoralizing and breaking down the country by facilitating ideological indoctrination and social breakdown in East/Shi’a communities, among Yemeni migrants, and disaffected young people. Houthis, previously thought to be a local insurgent group, are increasingly becoming an integrated partner in Iran’s growing narcoterrorism network.
The meetings of the conference can be watched on YouTube at this link: https://www.youtube.com/channel/UCGfavSTCqgD6mCN_k-0f5cg
Source: The Washington Outsider