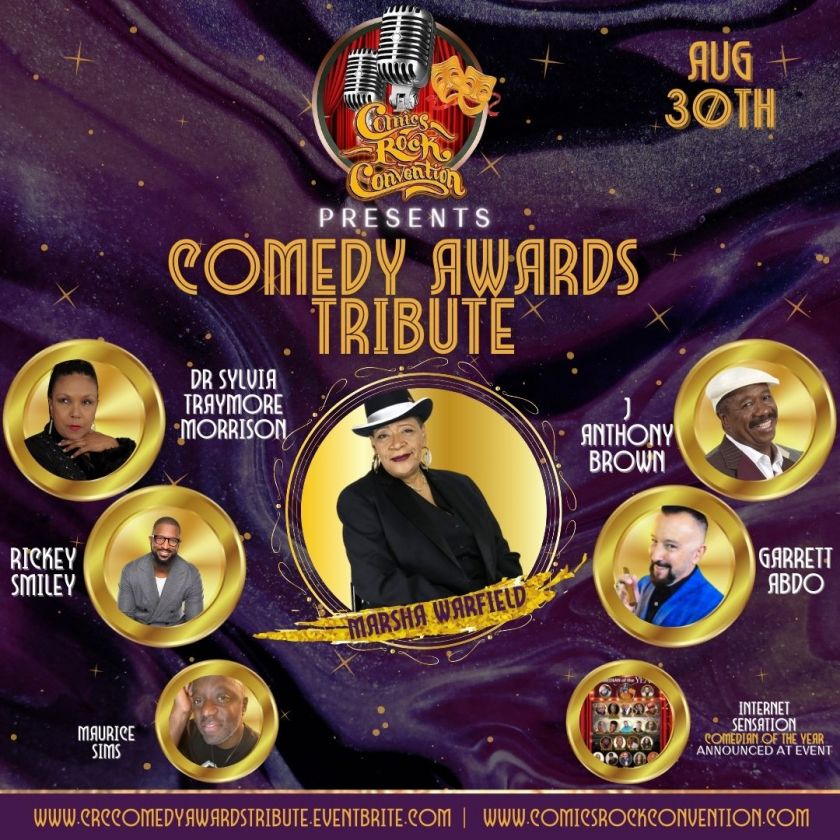 Veteran comedienne Hope Flood, Founder of Comics Rock Convention (CRC), is back for the eighth year to bring together comedic talent from all over the country. During the five-day convention, scheduled for Aug. 29-Sept. 2, 2021, from the novice to the veteran, there is something for every comedian at CRC. Attendees can expect to gain industry knowledge and valuable insight from career professionals during daily workshops, seminars, and panels including how to effectively brand and manage their business.
Day one of the convention includes a Meet & Greet and Professional Development Day for comedians at the Atlanta Comedy Theater, which includes a pizza party, networking events, a host of vendors, food and drinks. There will also be workshops and seminars hosted by an array of industry experts, including Talent Booker Tina Graham, Willie Lynch, Jr., and Comedian Shang Forbes. The event takes place Sunday, Aug. 29, 2021, at The Atlanta Comedy Theater, 4650 Jimmy Carter Blvd. #114B, Norcross, GA 30093.
Day two special events include The Purple Carpet Comedy Awards Tribute night, which will honor Veteran Actor/Comedian J. Anthony Brown, Veteran Actor/Comedienne Marsha Warfield, on-air personality/Comedian Ricky Smiley, First Black Female Impressionist Sylvia Traymore Morrison, Comedy Club Owner/Producer Gary Abdo, Promoter and Owner of the Atlanta House of Comedy Maurice Sims, and a chosen internet sensation Comedian. There will also be special musical performances by Tony Terry, Lamar “Deuce Lubin from DRS, Londee The Artist and a never-before-seen one woman show performance by legendary Comedienne Marsha Warfield called “The Book of Marsha”. Actress/Comedienne Cocoa Brown, along with V103 Radio Personality Tyler Chronicles, are the celebrity host, and Comedian/Actor Bruce Bruce will be one of the celebrity presenters. The event takes place Monday, Aug. 30, 2021, at Revel Atlanta, 1778 Ellsworth Industrial Blvd. NW, Atlanta, GA 30318.
Days three, four, and five include virtual and in-person educational workshops/seminars and networking opportunities taught by various industry experts including Comedian Rodney Perry, Comedienne Cocoa Brown, and Attorney Antavius Weems, and more at Atlanta Comedy Theater, located at 4650 Jimmy Carter Blvd #114b Norcross, GA 30093. Attend nightly showcases hosted by veteran celebrity comedians at ATL’s mainstream comedy clubs (Punchline and Atlanta Comedy Theater). The convention will close out with a Farewell Awards Luncheon, featuring Hope’s Fav Things Giveaways.
Registration is open now for all comedians at www.comicsrockconvention.com.
To purchase tickets, please visit http://www.crccomedyawardstribute.eventbrite.com
About Comedienne Hope Flood
She is Founder of the Annual Comics Rock! Convention and is a 30-year veteran comedienne, philanthropist, and business owner. Known for “Keeping it Real” on stage, her off-stage commitment and dedication to CRC and other entrepreneurial and charitable ventures, demonstrates her desire to help comedians navigate and succeed in the entertainment industry. www.hopeflood.com
###
Source: Comics Rock