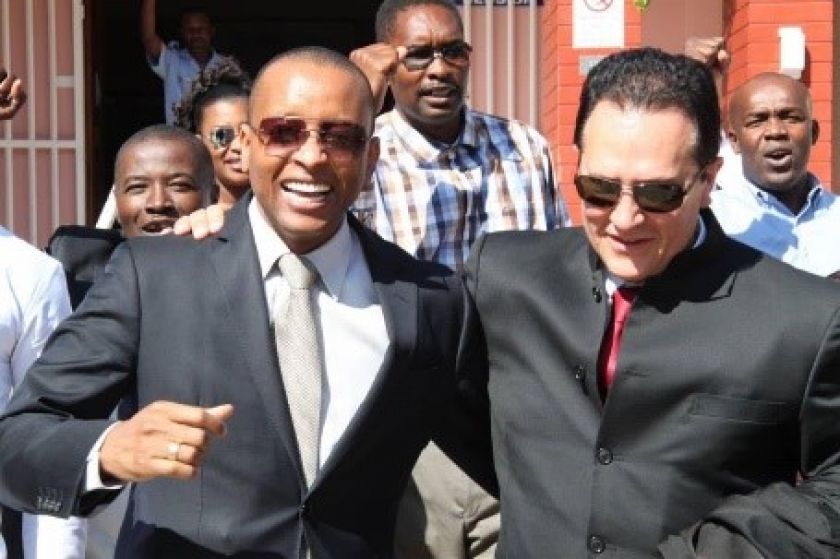 As publicly reported on Monday, Oct. 4, 2021, justice has finally prevailed as the High Court of Namibia has ordered the appeal of Tobie Aupindi upheld and that all fines paid must be reimbursed. Aupindi, a successful international businessman, Namibian lawmaker and elected high ranking official, was completely exonerated of politically motivated corruption allegations dating back to 2007. Charges were filed against him in the Magistrate Court by the Prosecutor General of Namibia in 2010. Read more about Dr. Tobie Aupindi in the “About Dr. Tobie Aupindi” section below.

The trial, held in Namibia, involved allegations of a bribe for approximately $3,500 toward the purchase of a swimming pool. Based on the judgment, as determined by the High Court of Namibia, it appears that Namibia’s Anticorruption Commission (ACC) fabricated evidence and then supported an unfair trial in the Magistrate Court. The result was that Dr. Aupindi was found guilty in 2018, and he was ordered to pay a fine to stay out of prison. Knowing his innocence, he immediately filed an appeal of the case to the High Court, which is presided over by two senior Judges, the Honorable Justice Mr. J.C. Liebenberg and the Honorable Justice Mr. H. January.
On Monday, Oct. 4, 2021, the judgment of the High Court signed by Justice J.C. Liebenberg and Justice H. January, upheld the appeal of Dr. Aupindi himself and businessman Antoni Di Savino. In the 25-page public judgment, the High Court of Namibia concluded in paraphrase that:
The High Court stated that, ” … they should have been found not guilty and discharged,” as the Court upheld the appeal, completely eradicating the convictions, and all fines paid were ordered to be reimbursed.
This protracted case is bringing further scrutiny on the credibility of the Namibian Anticorruption Commission and their capacity to really fight corruption as it became apparent in the trial that they fabricated evidence, choreographed witnesses, avoided key witnesses, and tried to hide key evidence. When asked to comment, defense Attorney Adv. Richard Metcalfe said, “Finally justice prevails. I feel that my client has been totally vindicated.”  He went on to say, “The unscrupulous investigation tactics must stop so taxpayer money is not so foolishly wasted on political witch hunts while more serious cases go unprosecuted. Namibia could have saved millions of dollars with the right decision not to prosecute, and the defense must now decide whether to file its own lawsuit to recover personal financial and defamation damages. This wrongful prosecution could have been dropped at any time over the last 10 years.”
Tobie Aupindi’s attorney, Richard Metcalfe, articulated his innocence and complete exoneration in a video interview with The Namibian Newspaper (https://www.namibian.com.na/105971/read/Aupindis-trial-ruled-unfair-in-appeal-judgement). See the video at this link below:
https://www.facebook.com/TheNamibianNewspaper/videos/2672733963035193/?extid=NS-UNK-UNK-UNK-IOS_GK0T-GK1C
About Dr. TOBIE AUPINDI: Dr. Tobie Aupindi is a well-known figure in international business and economic circles. His business ventures focus on the financial and oil and gas sectors of the United States, Middle East, and Namibia. He is also a Namibian Politburo Member (SWAPO Ruling Party Member), Central Committee Member, and an elected National Assembly Member (House of Representatives). He was named by World Traveler Awards (WTA) as Africa’s Personality of the Year in 2010. He has been the top executive for several successful international business ventures since June of 2010.
About STARTEXAS PRODUCTIONS INC: StarTexas Productions Inc is a Texas corporation chartered in 2012 that focuses on special musical talent development, promotion, and expanded scope public relations known as STARTEXAS ESPR, which are custom PR services made available for individuals in politics or business and companies in any industry or market.
United States Contact:
KP WATTS, CHAIRMAN
STARTEXAS PRODUCTIONS INC
Email: kwatts@startexas.net
Phone: 281-799-8016