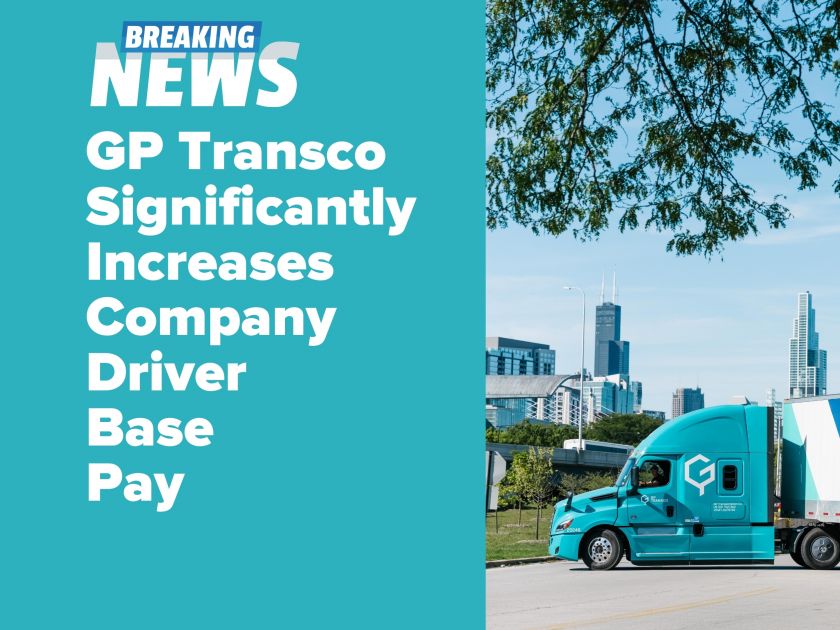 GP Transco, a trucking company out of Joliet, IL announced this week a major base pay increase for company drivers. Previously, company driver base pay was 52 cpm for W2 company drivers, with the ability to earn more through a performance-based profit sharing program. Starting today, GP Transco’s company driver base pay is increased to 60 cpm, and 58 cpm for drivers who opt out of having an optional driver-facing camera; profit-sharing will no longer determine the total driver pay. This large increase in base pay, along with the current average accessorial pay of 5 more cpm, as well as the company’s fuel bonus program, means that W2 company drivers will now earn about 66 cpm and more during their first year with the company. The base pay increase also means that company drivers can now expect to earn $90,000 during their first year with GP Transco, with top-performing drivers earning over $100,000 after being with the company for 4 years (based on 2,700 miles driven on a weekly average, for drivers who qualify for raises based on performance, safety, and fuel utilization efficiency). Company team drivers also received the same base pay increase, going from 65 cpm to 75 cpm.
The company also announced 6-month raises to company driver base pay, which adds 1 cpm every 6 months to qualifying drivers. This means that after working at GP Transco for 4 years, top-performing over-the-road drivers will earn a base of 68 cpm, and combined with accessorial pay, it would put drivers roughly at 73 cpm. This level of compensation was previously unheard-of in the trucking industry for full time W2 over-the-road, dry van solo drivers; GP Transco’s emphasis on employing only the most professional drivers is what drove the decision for the pay increase, according to Marija Jamontas, GP Transco’s VP of Safety and Administrative Services. “The freight market is doing well, and our contracted customers are extremely happy with the way our drivers are performing,” said Marija. “Increasing base pay will allow us to continue having some of the safest, most motivated and skilled drivers in the industry work for the company. The high pay combined with full benefits and 401k with a 5% match will also allow us to be even more selective in terms of recruiting incoming drivers.”
Media contact:
Sergey Bort | VP of Marketing and Strategic Business Development | sergey@gptransco.com
Source: GP Transco