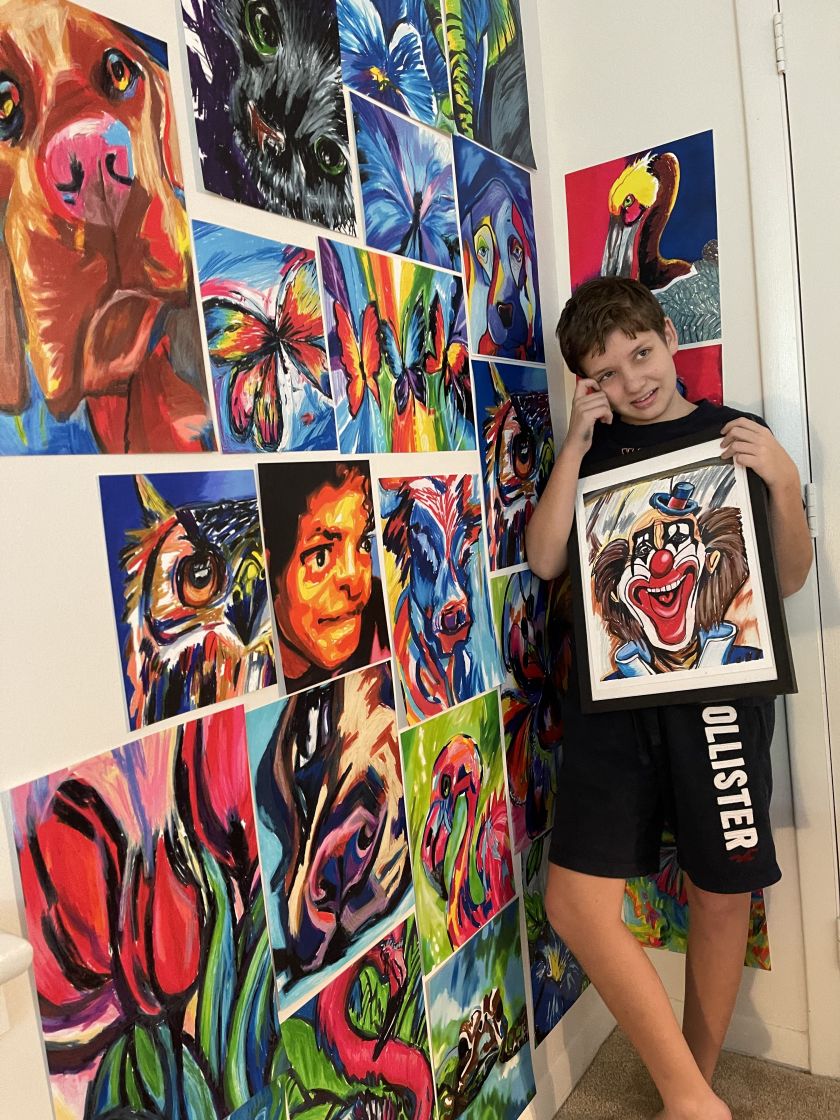 A gifted young artist from Serbia is taking social media by storm with his oil pastels of leaf-munching giraffes, basking butterflies, moonlit waterlilies, poignant portraits and soulful-eyed dogs. With tens of thousands of followers and over a million “likes”, what Viktor Bevanda is accomplishing with his striking use of color is extraordinary, especially when you consider that he’s only 12, non-verbal and autistic.
Viktor was diagnosed with a serious form of autism at age 5, about the same time his parents became aware of his emerging artistic talent. “It was heartbreaking knowing that he would be different from his peers,” said Viktor’s mother, Andrea. “But my husband, Boris, and I were committed to giving him every opportunity.” And that meant eventually immigrating to America where they could find many more resources for autistic kids.
After a lengthy immigration process, the family finally arrived in the U.S., settling in Aventura, Florida, in 2018.  “We absolutely love it here,” said Andrea, a former marketing executive, whose husband works as an elite tennis coach and founder of Bevanda Tennis in Aventura. As for Viktor, his daily learning limitations are continually being eclipsed by his immense creative genius.
As with many kids, his drawings over the years have been largely influenced by the cartoon characters he watched on TV.  And then at the height of the pandemic in 2020, Andrea, who homeschools her kids, decided to try something new.  “I wanted to see if I could channel his art into different directions, so I presented several pictures and asked him to choose one to draw. The result was a miracle on paper,” she said.  “What’s also amazing is how effortlessly, nearly automatically, he makes strokes and selects colors without hesitation or second-thoughts.”
The breadth of his original works using oil pastels quickly expanded to lush landscapes, whimsical underwater scenes, sailboats on turbulent seas, fabulous animal art, including horses, eagles and flamingos — even portraits of Abraham Lincoln, Albert Einstein and Marilyn Monroe. As his portfolio continued to expand, Andrea created a website to showcase and sell his art. She also established a fast-growing social media presence for Viktor.
And while Viktor has no idea how much people love his art, she says he appears happy when creating. “Our hope is that he has a future in art ahead of him.”  And if the enthusiastic reaction to his work is any indication, that future is rapidly approaching. As one client of his art put it, “He proves Autism is no barrier to creativity. He has an extraordinary ability to focus on detail and understand how colors interact.”
To view Viktor’s latest creations, or purchase an original work or high-quality print, go to vichysart.com.
Source: Viktor Bevanda