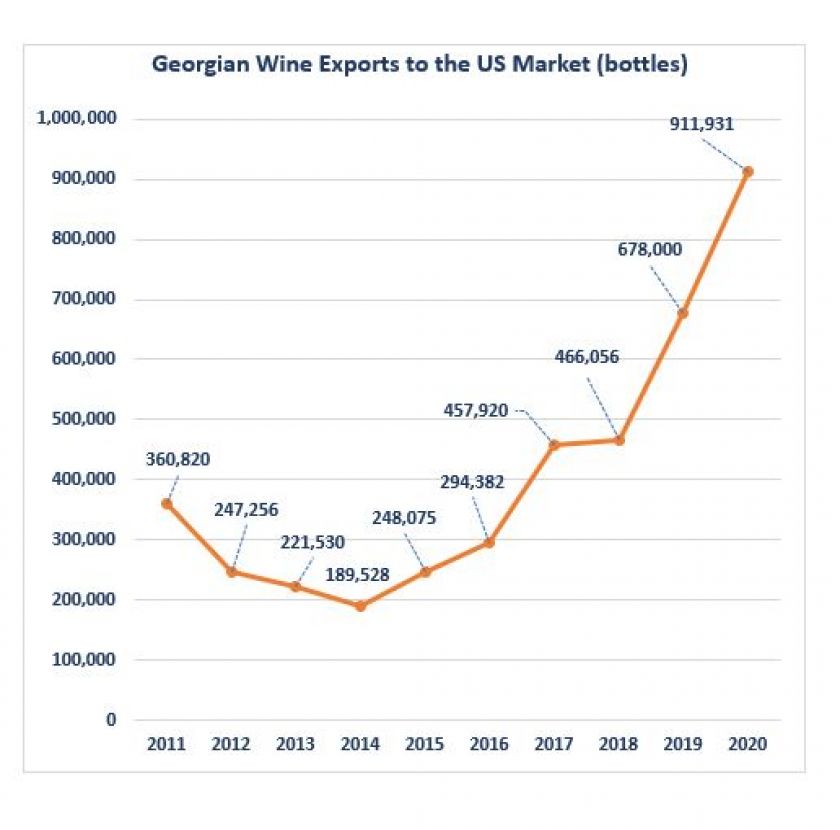 Despite the pandemic rattling last year’s global wine market, imports of Georgian wines to the U.S. continued to thrive. Figures from The National Wine Agency of Georgia show that for six consecutive years, Georgian wine exports to the United States have averaged +31% year-over-year by volume. Average bottle price also climbed each year; in 2020, the average ex-cellars price rose to $5.14. As the American Association of Wine Economists wrote on Feb. 28, “Georgia has continued its amazing run … The value of wine imports from Georgia have continued to surge; with value climbing by 21.4% in 2020 (after 51.3% in 2019).”
“Education will continue to be the foundation of growth, as each bottle reflects Georgian wine history, culture, varietals and its 8,000 vintages of winemaking tradition,” explains Levan Mekhuzla, Chairman of Georgia’s National Wine Agency. “Georgia has much to share about its rich winemaking tradition, from its qvevri winemaking method to its leading native varietals such as Saperavi and Rkatsiteli. At the same time, it’s important to share how these traditions continue to flourish and evolve in present Georgian winemaking, from wineries large and small. Merging these two points will allow us to tell the full story of Georgian wines and continue to help wine producers penetrate, broaden, and deepen their U.S. market presence this year.”
From 2016 to 2020, the number of registered wineries within Georgia’s 10 wine regions grew from 402 to 1,575, and the number of wineries imported to the U.S. grew from 40 to 150. Both increases coincide with a dramatic rise in acclaim from around the globe. Over the last two and a half years, more than 100 Georgian wines have received 90+ wine scores from publications of prominence like Wine Enthusiast, Decanter, and Wine & Spirits. These honored labels include qvevri wines fermented with skins — colloquially known as amber or orange wines — as well as those made using European methods.
Georgian wines available in the U.S. are featured on the Wines of Georgia website at www.winesgeorgia.com, which also includes a Where to Buy directory. The organization’s YouTube channel also has individual videos on 60 wineries. Please also follow Wines of Georgia on FB: @winesgeorgia, Instagram: @winesgeorgia, and Twitter: @Wines_Georgia.
About Georgian Wines
Scholars recognize Georgia as the birthplace of wine. In 2015, archaeologists working in Georgia discovered ancient, egg-shaped clay vessels (qvevri) containing the residue of cultivated grapes. Using archaeological, biomolecular, and other methods, researchers dated these artifacts to 6000 BCE, during the Neolithic Period. A research report published by the U.S. National Academy of Sciences describes the discovery as the earliest evidence of viniculture and winemaking.
Media Contact
Christine Deussen
Deussen Global Communications, Inc.
New York, NY
Mobile: 917-545-1459
cdeussen@deussenglobal.com
Trade & Strategy Contact
Julie Peterson
Wines of Georgia – U.S. Office
Marq Wine Group
Washington, DC
Mobile: 202-999-7533
julie@marqwine.com
Source: The National Wine Agency of Georgia