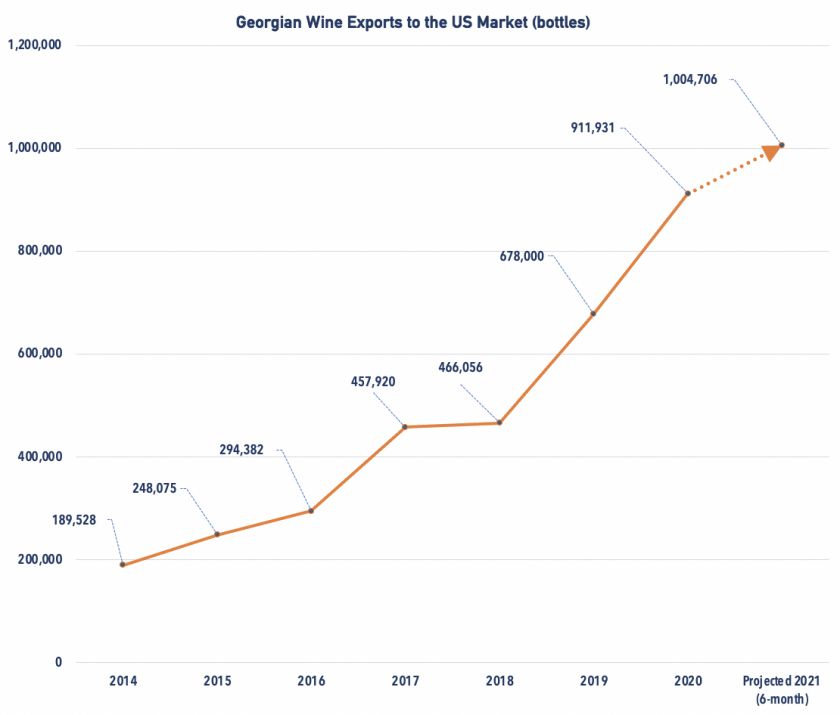 The National Wine Agency of the Ministry of Agriculture of the country of Georgia reports that Georgian global wine exports continue to grow, posting 13% above 2020 with exports to the U.S. running 35% ahead of last year. This follows five consecutive years of similar growth year over year.
The Head of Marketing & PR of the Georgian National Wine Agency, Tamar Metreveli, says, “So far this calendar year, Georgia’s growth in total wine exports has brought 7% more income into our country. The U.S. continues to be a priority export market, drawing the highest ex-cellar price which reflects the American wine-drinking public’s desire for quality and interest in regions and grapes produced around the world. This, coupled with the growing access to Georgian wine through our long-term market development program, provides an exceptional opportunity for growth.”
The U.S. program is led by Marq Wine Group. Principal campaign elements include:
More About Georgian Wines and Winemaking
The country of Georgia sits on the eastern edge of the Black Sea, at the crossroads of Europe and Asia. This tiny country — slightly smaller than Connecticut — is a hotspot of bio-diversity and home to more than 525 indigenous grape varieties.
In 2015, archaeologists working in Georgia discovered ancient qvevri containing the residue of cultivated grapes. Using archaeological, biomolecular, and other methods, researchers dated these artifacts to 6000 BCE, during the Neolithic Period. A research report published by the U.S. National Academy of Sciences describes the discovery as the earliest evidence of viniculture and winemaking. In 2013, the United Nations added qvevri winemaking to the UNESCO list documenting humanity’s intangible cultural heritage and, in 2021, qvevri were the first non-consumable to be granted a Protected Geographical Indication (PGI) designation.
YouTube     FB: @winesgeorgia     IG: @winesgeorgia     Twitter: @Wines_Georgia
Media Contact
Christine Deussen
Deussen Global Communications, Inc.
New York, NY
Mobile: 917-545-1459cdeussen@deussenglobal.com
Trade & Strategy Contact
Julie Peterson
Wines of Georgia — U.S. Office
Marq Wine Group
Washington, DC
Mobile: 202-999-7533julie@marqwine.com
Source: The National Wine Agency of Georgia