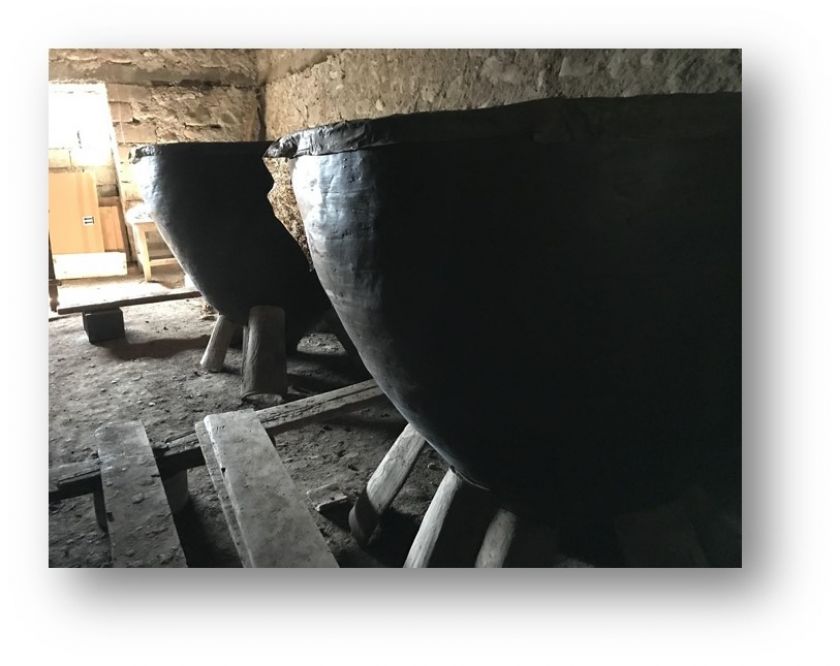 The National Wine Agency of the Ministry of Agriculture of the Country of Georgia reports that qvevri (pronounced KWEH-vree) are the first non-agricultural product to ever be added to the Georgian State Registry of Protected Geographical Indication (PGI). This PGI legally establishes Georgia as the place of origin of qvevri, as well as codifies their shapes, capacities, raw materials, and production methods.
The Georgian State Register of Protected Geographical Indication (PGI) aligns with the EU classification system. Similar to the French system, the PGI designation is akin to a VDP (Vin de Pays) classification. Now under PGI regulation, only raw materials obtained in Georgia shall be used for the production of qvevri.
Qvevri are large clay vessels — often 1,000 or more liters — which are buried up to their necks to keep temperatures constant during fermentation and aging. In the traditional method, winemakers ferment the juice and skins together and the skin contact turns what would otherwise be white wines into amber wines with tannins (some outlets have nicknamed these wines “orange wines”). Winemakers use qvevri to ferment red grapes as well as white grapes. The qvevri are also used to age and store wines.
Chairman of the National Intellectual Property Center of Georgia (Sakpatenti) Mindia Davitadze explains: “Georgia is the archaeologically proven birthplace of wine, and Georgians have made wine in qvevri continuously for 8,000 years, so awarding the PGI was a natural decision … as wines made in qvevri are overwhelmingly made following ancient practices.”
Minister of Environmental Protection and Agriculture Levan Davitashvili reported: “With the rising popularity of amber and natural wines, the demand for qvevri wine is on the rise in Georgia and internationally. For example, over the last five years, qvevri wine exports to the U.S. grew an average of over 34%. Now, we even see wines made in qvevri being made there (as well as in Italy, Slovenia, and many other countries). The new qvevri PGI should further increase demand for Georgian wine overall, as well as raise its value and facilitate global promotion of Georgian wine.”
Qvevri are made by hand by Georgia’s master potters. In 2013, the United Nations added qvevri winemaking to the UNESCO list documenting humanity’s intangible cultural heritage.
Press Contact
Christine Deussen
Deussen Global Communications, Inc.
New York, NY
Mobile: 917-545-1459cdeussen@deussenglobal.com
Trade & Strategy Contact
Julie Peterson
Wines of Georgia – U.S. Office
Marq Wine Group
Washington, D.C.
Mobile: 202-999-7533julie@marqwine.com
Source: The National Wine Agency of the Ministry of Agriculture of the Country of Georgia