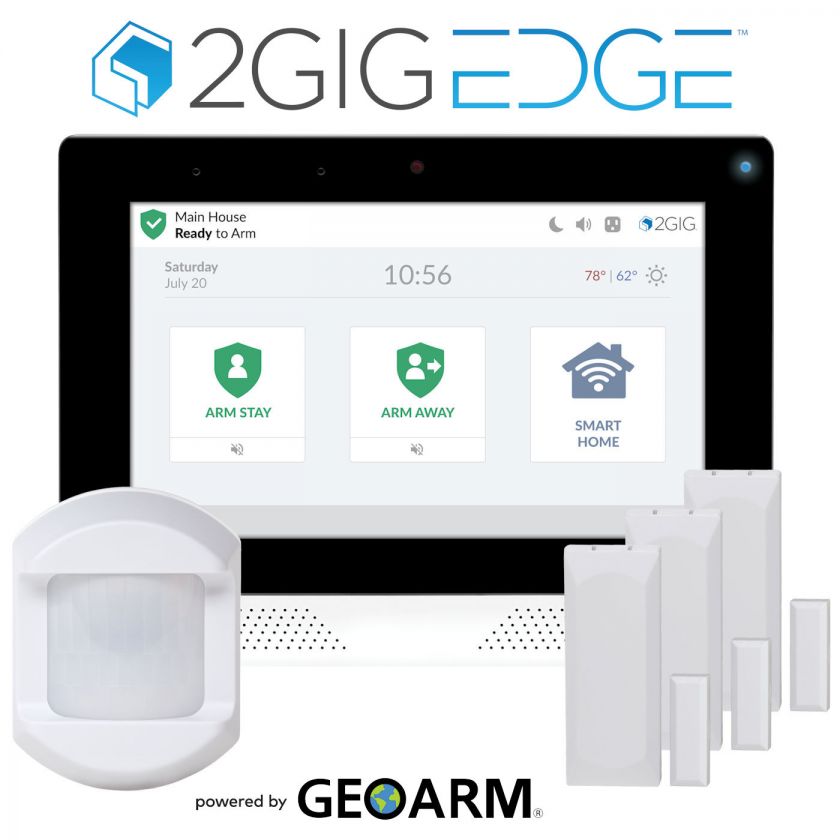 The 2GIG EDGE wireless security system sets a new benchmark in form and function with its sleek design that is thinner and more powerful than ever. The panel contains a wireless 7″ touchscreen control panel that comes with a built-in dual-path Wi-Fi/cellular AT&T or Verizon LTE alarm communicator that is powered by Alarm.com and GeoArm.
With on-the-edge processing technology, the 2GIG EDGE enables touchless Bluetooth disarm capabilities. The EDGE panel also features facial recognition and analytics within the panel so private data stays private for greater peace of mind.
The EDGE can add up to 100 users, 32 keyfobs, eight keypads, 100 wireless zones and even has two wired zone inputs. 2GIG has developed a wide range of eSeries encrypted wireless sensors that may be added to the EDGE panel, together with older non-encrypted 2GIG and Honeywell 5800-Series security sensors.
It can also integrate Z-Wave and Z-Wave Plus sensors so users can take control of their smart home automation. For more complete automation, users can create and execute scenes and schedules. Additionally, the panel is also compatible with voice controls through Google Assistant, Amazon Echo and Siri Shortcuts. So, you can easily lock your front door from your couch by asking “Alexa” or “Siri” to do so!
For video surveillance solutions, the EDGE can integrate with the full line of compatible Alarm.com security cameras and video doorbells. Having a built-in front video camera, the 2GIG Edge can also display the live video on the touchscreen and/or up to four camera feeds at the same time.
With cutting-edge enhancements such as double the viewing area, higher resolution, two speakers and dual microphones, the EDGE delivers superb audio quality and two-way voice communication. Together with smart automation, the EDGE was developed as an all-in-one small business and home security solution for the DIYer.
Source: GeoArm Security