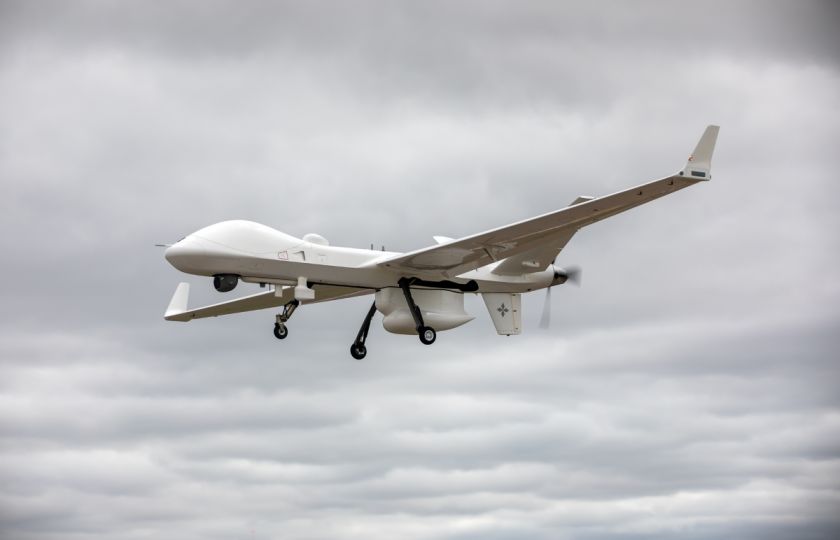 In cooperation with the UK and Netherlands airspace authorities, the Royal Air Force, and the Royal Netherlands Air Force (RNLAF), General Atomics Aeronautical Systems, Inc. (GA-ASI) flew a company-owned, MQ-9B SeaGuardian® Remotely Piloted Aircraft (RPA) today from RAF Waddington across the North Sea to Leeuwarden Air Base in the Netherlands, completing a two-day series of flights between the two airspaces.
This multi-day demonstration displayed SeaGuardian’s maritime surveillance capabilities in support of international allies. SeaGuardian returned to RAF Waddington at the conclusion of the event.
The flight is part of a maritime demonstration series that began in August and continues through September. The goal of the flight series is to showcase the many operational capabilities of the MQ-9B, including the platform’s advanced maritime Intelligence, Surveillance and Reconnaissance (ISR), Detect and Avoid System (DAAS), industry-leading endurance, and interoperability with NATO partners.
The RNLAF has ordered four MQ-9A RPA and the first is expected to be delivered to Leeuwarden later this year.
“Today’s flight is a major milestone for us. It demonstrates the ability of the MQ-9 to operate in our airspace and validates the procedures for air traffic control. It also familiarizes the air traffic controllers with Remotely Piloted Aircraft, which is an opportunity we have not had before,” said Lieutenant-Colonel Boudewijn Roddenhof, commander of the RNLAF’s 306 squadron, which will operate the new MQ-9A Reapers.
“We’re thrilled to showcase the game-changing capabilities of our RPA for the Royal Netherlands Air Force,” said Robert Schoeffling, vice president of International Strategic Development for GA-ASI. “We appreciate the international cooperation we’ve received from the RAF, the RNLAF and civil aviation authorities such as the UK Civil Aviation Authority. Our MQ-9B series is built and equipped to meet certification standards that will allow it to fly in non-segregated airspace.”
The flight to Leeuwarden was conducted as Operational Air Traffic, under the control of UK military air traffic controllers at Swanwick, up to the boundary between the UK’s and the Netherlands’ controlled airspace. At the agreed crossing point, Dutch military air traffic controllers took responsibility for the flight.
Next up, SeaGuardian will participate in the UK-led Joint Warrior exercise, which will showcase how the MQ-9B’s maritime capabilities can be integrated with other air, surface and land platforms. SeaGuardian’s maritime capability includes a multi-mode maritime surface-search radar with Inverse Synthetic Aperture Radar (ISAR) imaging mode, an Automatic Identification System (AIS) receiver, Electronic Surveillance Measures (ESM) along with the standard High-Definition, Full-Motion Video sensor equipped with optical and infrared cameras.
The flights also demonstrate GA-ASI’s revolutionary Detect and Avoid System, a safety and situational awareness enhancement designed to support MQ-9B flight in non-segregated airspace worldwide. DAAS enables MQ-9B to operate among civilian aviation traffic in the national airspace, unlike any other aircraft in its class.
SeaGuardian is the maritime version of the MQ-9B SkyGuardian®.
About GA-ASI
General Atomics-Aeronautical Systems, Inc. (GA-ASI), an affiliate of General Atomics, is a leading designer and manufacturer of proven, reliable remotely piloted aircraft (RPA) systems, radars, and electro-optic and related mission systems, including the Predator® RPA series and the Lynx® Multi-mode Radar. With more than six million flight hours, GA-ASI provides long-endurance, mission-capable aircraft with integrated sensor and data link systems required to deliver persistent flight that enables situational awareness and rapid strike. The company also produces a variety of ground control stations and sensor control/image analysis software, offers pilot training and support services, and develops meta-material antennas. For more information, visit www.ga-asi.com.
Avenger, Lynx, Predator, SeaGuardian and SkyGuardian are registered trademarks of General Atomics Aeronautical Systems, Inc.
# # #
CONTACT:
GA-ASI Media Relations
General Atomics Aeronautical Systems, Inc.
+1 (858) 524-8101
ASI-MediaRelations@ga-asi.com
Source: General Atomics Aeronautical Systems, Inc.