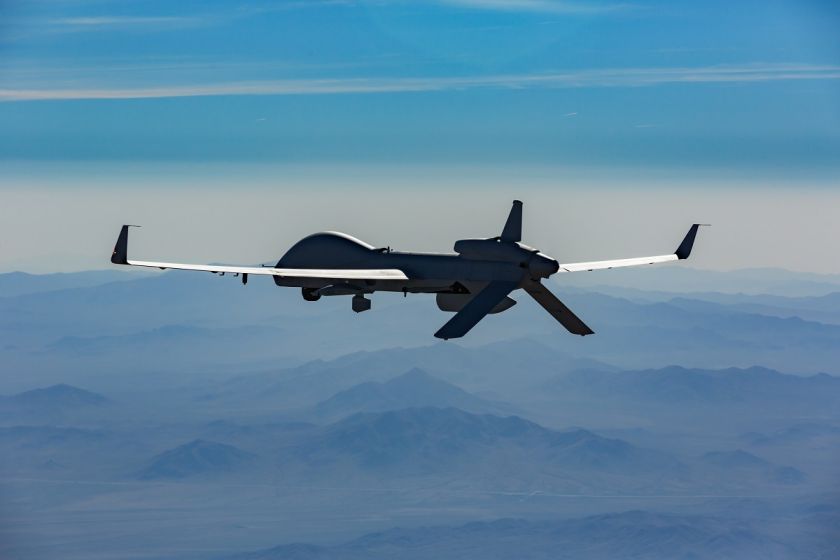 General Atomics Aeronautical Systems, Inc. (GA-ASI) announced today that the family of Gray Eagle Unmanned Aerial Systems (UAS) surpassed 1 million flight hours on March 16, 2021, during U.S. Army flight operations.
This historic milestone is the latest accomplishment on a remarkable journey that started in March 2004 with the first flight of an early variant of the Gray Eagle UAS family called Army IGNAT. Since that first flight, GA-ASI and the U.S. Army have fielded over 250 Gray Eagle-type aircraft, including the new Gray Eagle Extended Range (GE-ER) aircraft. Over 80% of the 1 million flight hours were flown in support of deployed operations with a better than 90% Mission Capable Rate.
“This landmark event demonstrates the inherent value of our Gray Eagle systems for the warfighter,” said GA-ASI President David R. Alexander. “It also is a testament to the great partnership between GA-ASI and the U.S. Army, which have worked together to expand the capability of Gray Eagle so the system will continue to be a key enabler for today’s mission and an enduring platform for tomorrow’s Multi-Domain Operations (MDO).”
The GE-ER UAS is a 40-hour endurance aircraft with increased payload capacity, reliability and maintainability over the legacy MQ-1C Gray Eagle first fielded in 2009. On the dawn of the next million flight hours, GE-ER is being further enhanced under the U.S. Army’s modernization program to incorporate leading-edge technology for standoff survivability, while expanding the payload capabilities to include Air Launched Effects (ALEs) and long-range sensors for stand-in effects. This MDO-ready UAS will be powered by a new 200-hp Enhanced Heavy Fuel Engine and dual 7.5kw brushless generators to enable the growing capabilities needed by commanders in the future MDO environment.
About GA-ASI
General Atomics-Aeronautical Systems, Inc. (GA-ASI), an affiliate of General Atomics, is a leading designer and manufacturer of proven, reliable remotely piloted aircraft (RPA) systems, radars, and electro-optic and related mission systems, including the Predator® RPA series and the Lynx® Multi-mode Radar. With more than six million flight hours, GA-ASI provides long-endurance, mission-capable aircraft with integrated sensor and data link systems required to deliver persistent flight that enables situational awareness and rapid strike. The company also produces a variety of ground control stations and sensor control/image analysis software, offers pilot training and support services, and develops meta-material antennas. For more information, visit www.ga-asi.com.
Lynx, Predator, SeaGuardian and SkyGuardian are registered trademarks of General Atomics Aeronautical Systems, Inc.
# # #
GA-ASI Media RelationsGeneral Atomics Aeronautical Systems, Inc.+1 (858) 524-8101 ASI-MediaRelations@ga-asi.com
Source: General Atomics Aeronautical Systems, Inc.