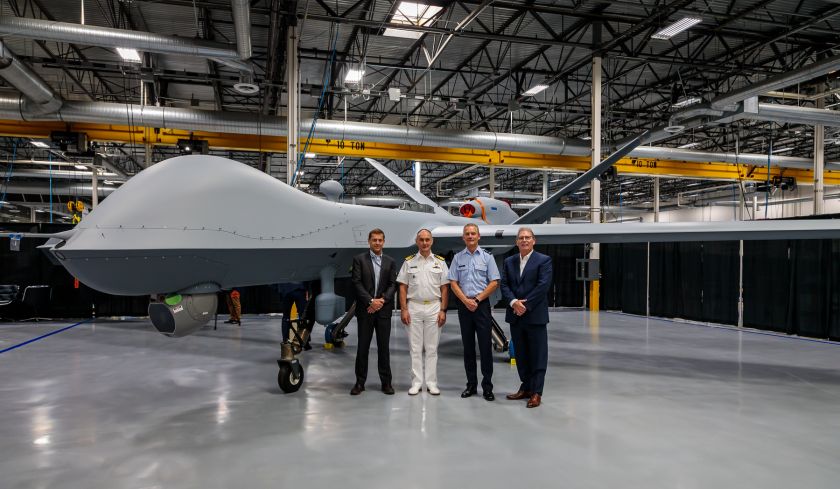 *** UPDATED DELIVERY SCHEDULE *** On July 7, 2021, General Atomics Aeronautical Systems, Inc. (GA-ASI) issued a press release announcing the completion of the first MQ-9A Block 5 Remotely Piloted Aircraft for the Royal Netherlands Air Force. In the press release, we stated the aircraft would be delivered to the RNLAF in early 2022 following acceptance testing. The actual anticipated delivery to the Netherlands is late 2021. The press release that follows reflects the revised information.
General Atomics Aeronautical Systems, Inc. (GA-ASI) announced yesterday the completion of the first MQ-9A Block 5 Remotely Piloted Aircraft (RPA) and Ground Control Station (GCS) for the Royal Netherlands Air Force (RNLAF). GA-ASI and RNLAF commemorated the occasion with a special roll-out ceremony at GA-ASI’s corporate headquarters in Poway, Calif., and the event was simulcast to the Netherlands.
The aircraft will begin its acceptance testing later this year at GA-ASI’s Gray Butte Flight Operations Facility near Palmdale, Calif., and the aircraft will be delivered to the Netherlands before the end of 2021. The total Foreign Military Sales agreement includes four MQ-9A Block 5 aircraft and four mobile Ground Control Stations, along with associated support equipment.
“We are proud to begin this new relationship with the Royal Netherlands Air Force,” said Linden Blue, GA-ASI CEO. “With millions of hours of proven performance under its wings, the MQ-9 is ideally suited to support their nation’s ISR needs. The Netherlands now joins the United Kingdom, Italy, France and Spain as NATO countries operating our advanced RPAs, with Belgium coming online in the next few years.”
With unmatched operational flexibility, MQ-9A Block 5 has endurance of over 27 hours, speeds of 240 KTAS and can operate up to 50,000 feet. It has a 3,850 pound (1,746 kilogram) payload capacity that includes 3,000 pounds (1,361 kilograms) of external stores. It provides a long-endurance, persistent surveillance capability with Full-Motion Video and Synthetic Aperture Radar/Moving Target Indicator/Maritime Radar. An extremely reliable aircraft, MQ-9A Block 5 is equipped with a fault-tolerant flight control system and triple redundant avionics system architecture. It is engineered to meet and exceed manned aircraft reliability standards.
About GA-ASI
General Atomics Aeronautical Systems, Inc. (GA-ASI), an affiliate of General Atomics, is a leading designer and manufacturer of proven, reliable Remotely Piloted Aircraft (RPA) systems, radars, and electro-optic and related mission systems, including the Predator® RPA series and the Lynx® Multi-mode Radar. With close to seven million flight hours, GA-ASI provides long-endurance, mission-capable aircraft with integrated sensor and data link systems required to deliver persistent flight that enables situational awareness and rapid strike. The company also produces a variety of ground control stations and sensor control/image analysis software, offers pilot training and support services, and develops meta-material antennas. For more information, visit www.ga-asi.com.
Predator, Lynx, SeaGuardian, and SkyGuardian are registered trademarks of General Atomics Aeronautical Systems, Inc.
CONTACT:
GA-ASI Media Relations
General Atomics Aeronautical Systems, Inc.
+1 (858) 524-8101
ASI-MediaRelations@ga-asi.com
Source: General Atomics Aeronautical Systems, Inc.