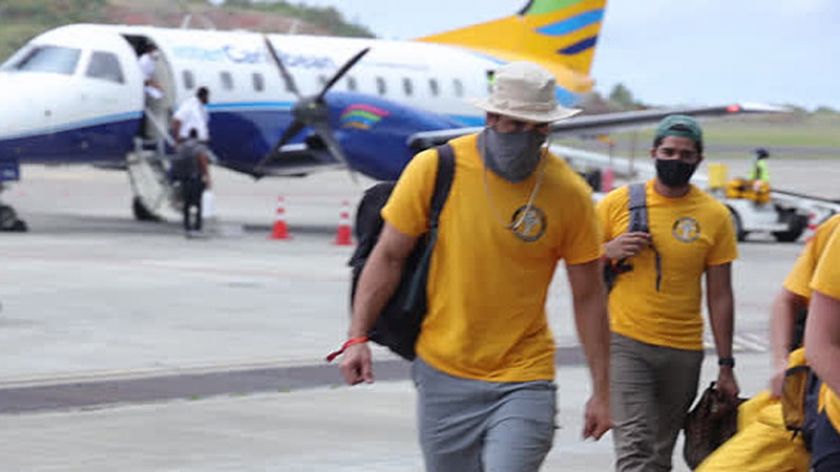 When La Soufrière erupted, forcing the evacuation of 16,000, the Freewinds, the Church of Scientology religious retreat and humanitarian ship in the Caribbean, responded with help. The ship sent a 40-foot container to Kingston containing more than 13,000 pounds of water storage tanks, respirators, blankets, tools and hygiene kits to help provide for the basic needs of those displaced from their homes. St. Vincent and the Grenadines Medical Association and the SVG Bar Association arranged for the supplies to be delivered to shelters.
President of the SVG Bar Association, Rene Edwards, thanked the Freewinds for coming to the island’s aid in its time of need and arranging for veteran Scientology Volunteer Ministers to fly to the island to assist in the cleanup and provide relief.
“Their donations will go a long way towards assisting many displaced persons,” said Edwards.
“The Caribbean is our home,” Freewinds Port Captain Ken Weber responded, and he assured Edwards that whenever disaster strikes in the region, the Freewinds will always be there to assist.
A religious retreat for Scientologists, the Freewinds has earned the reputation as the Scientology humanitarian ship because the ship’s crew and visiting Scientologists have contributed tens of thousands of volunteer hours to Church-supported humanitarian missions implemented by the Freewinds wherever it sails.
One such mission was the ship’s response to the pandemic in Aruba, where the Freewinds was docked when the island closed its borders in March 2020. Volunteer Ministers from the ship handed out 97,000 educational booklets to help local residents understand how to keep themselves and their families safe and well. They sanitized places of worship and teamed up with the fire department to clean and disinfect government offices and every public school on the island.
This outreach is featured in a video in the new interactive timeline on the Scientology website: 20/21—A Look Back & A Look Ahead: The Caribbean
For more information, visit the Freewinds website or watch Inside Scientology: The Freewinds on the Scientology Network.
Source: Church of Scientology International