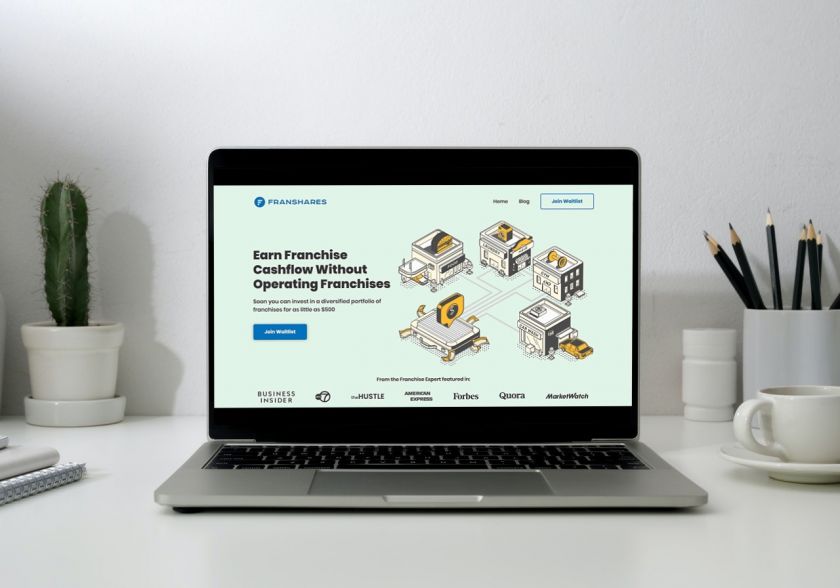 FranShares, soon to provide fractional franchise ownership to investors, has announced an SEC filing for its initial fund to democratize passive franchise income and equity ownership to investors worldwide.
The FranShares filing comes after finishing a pre-seed raise of $1.42 million led by Chicago Ventures. Chicago Ventures has previously backed companies like Cameo, M1 Finance, Project44, G2, and Sunbit. Other investors include the Founding CTO of Chartboost Sean Fannan (acquired by Zynga), the Founding COO of MuteSix Daniel Rutberg and CSO Moody Nashawaty (acquired by Dentsu), Jonathan Tabaroki, Davin Carey, and other angel investors.
The investment landscape continues to change at a rapid pace as traditional finance wars with Reddit-fueled meme stocks and retail investors pour money into crypto, NFTs, and other alternative asset classes. Additionally, due to crowdfunding regulation changes, investors today have the ability to invest across many previously inaccessible asset classes such as real estate, artwork, collectibles, wine, farmland, and more.
Franchising is a massive, untouched asset class within this new wave of alternative investing. The Franchising industry spans 100+ industries and thousands of brands, including household names such as McDonalds, Chick-Fil-A, Ace Hardware, and Supercuts.
The outsized returns offered by well-managed franchise portfolios have previously been unavailable to most investors. This is because franchise investing has historically required $100k+ minimums, operational expertise, and significant time commitments.
FranShares unlocks this entirely new asset class for retail investors. This funding round will allow FranShares to complete Regulation A+ SEC filing which will allow both accredited and non-accredited investors to invest in the first FranShares portfolio. This means with a minimum investment of $500, anyone can access this asset class.
By investing in franchise ownership, investors will realize not only equity appreciation, but also a steady stream of income from franchise operations. FranShares already has partnerships with over 500 franchise brands across the country that are potential investment candidates for FranShares first fund.
FranShares was started by Kenny Rose, Founder & CEO of Semfia Franchise Brokerage and a renowned expert on franchise investing. He has been featured in Business Insider, Forbes, ABC, TheHustle, American Express, the Amazon feature book “More Than Just French Fries,” and other publications around the world. His views on franchising have reached a media audience of over 300 million people.
During the pandemic, Kenny read an article detailing the uptick in retail stock market trading due to a lack of live sports to bet on. That’s when he knew it was time to act on a massive, untapped opportunity – make investing in franchises like investing in the stock market.
“There are over 4,000 franchise brands out there. That’s more choices than there are stocks on the NASDAQ or the NYSE,” says Kenny Rose. “I believe it’s time for people to understand this asset class and capitalize on the attractive returns.”
FranShares resonated with Stuart Larkins, Founding Partner at Chicago Ventures, due to his prior experience investing in the franchise industry. “Years ago I was lucky enough to have the opportunity to invest in a private equity fund that was consolidating over 500 quick serve chains to become their largest franchisee, and it was a great outcome. When we met Kenny, I immediately understood the value in FranShares. It’s a revolutionary way to invest in an asset class that’s been overlooked and inaccessible to the masses.”
For more information about FranShares and to join the waitlist, please visit https://www.franshares.com
For press inquiries please email info@franshares.com
About FranShares
FranShares will soon let you invest in a diversified portfolio of franchise locations for as little as $500. By adding franchise ownership to your investments, your equity will increase in value over time while you earn passive income from franchise cash flows. FranShares was founded by Kenny Rose, a world renowned franchise expert with a media reach exceeding 300 million people. He has been featured in Business Insider, Forbes, ABC, and other leading publications. FranShares is partnered with over 500 franchise brands and backed by Chicago Ventures. Join the waitlist today at www.franshares.com.
Source: FranShares