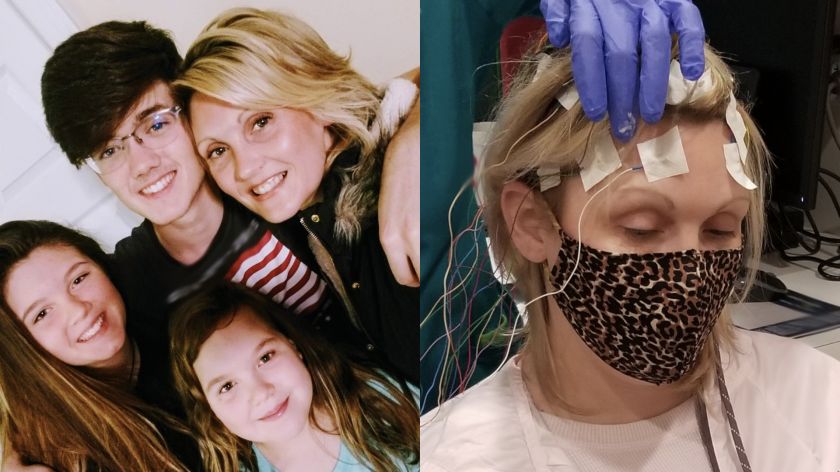 Many suffer from headaches or migraines, but for Jessica Stamey, doctors are left wondering what exactly is causing not only her excruciating pain, but debilitating seizures, hallucinations, vision problems and more.
Jessica’s health problems came to head earlier this year, when her day began with a painful, albeit normal, migraine. Her symptoms persisted for three days, at which point she was rushed to the ER with stroke symptoms, hallucinations, tremendous head pain, and full-blown seizures. There, her family received little in the way of answers. Doctors advised they seek more scans and a neurologist, despite Jessica having seen one only days earlier.
“During all of this time, my mother cries in pain, has little to no vision, cannot speak in a manner that can be understood, and has completely lost her personality,” writes Jessica’s daughter Josie Stamey on a GoFundMe page dedicated to finding relief for her mother, who is a loving mother of three and passionate entrepreneur.
Jessica’s search for relief is currently being led by Dr. Alan Maloon of Marietta, Ga. “Although Dr. Maloon originally felt very positive about her recovery, after viewing the many home videos of her speech and inabilities, he has grown increasingly concerned,” says Josie.
Though she is a four-time cancer survivor, scans of Jessica’s brain have revealed no tumors or bleeding in her brain. More testing is required to gain a full understanding of her condition, but Dr. Maloon and others feel confident in diagnosing Jessica with a rare form of epilepsy called migralepsy.
Recommended next steps include an extended-time night sleep EEG test. From there, her family will likely seek counsel at the Reed Migraine Center in Texas, where doctors will determine Jessica’s eligibility for a pacemaker brain implant.
With these expensive solutions out of reach, Jessica requires full time, around-the-clock care. Her family bathes her, cooks for her, and helps her to walk. “We have tried every migraine cocktail they prescribed and even some the strongest narcotics to help her with little to no relief,” says Josie.
To date, Jessica’s medical expenses have risen to over $50,000. They are expected to climb even higher considering the additional tests, weekly medical visits, medication and much-needed personal therapy.
Jessica is one of the nearly 31 million Americans that, according to the U.S. Census Bureau, is left seeking help without health insurance. Jessica’s condition prevents her from working, yet she has been denied unemployment assistance twice and fails to quality for governmental disability benefits or social security insurance. Says Josie, “we have exhausted all options.”
Josie and her family have recently launched a GoFundMe to raise awareness of migralepsy and support the search for relief for their mother.
Source: Jessica Stamey's Fundraising Team