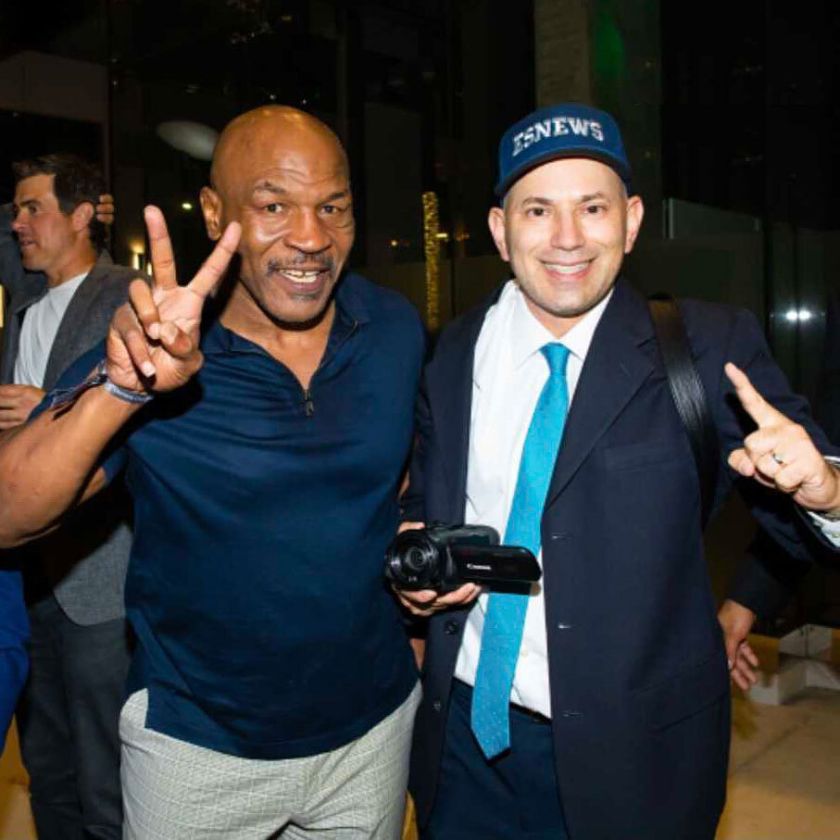 Shortly after Manny Pacquiao’s final roadwork session in preparation for his final fight, the iconic boxing champion took a breather in his SUV. As the hundreds of fans gathered at Griffith Park continued cheering, Pacquaio summoned YouTube’s No. 1 boxing reporter inside for a sandwich and a face-to-face conversation. Elie Seckbach documented it all on his trusty video camera. Within hours, the clip was uploaded to his EsNews channel on YouTube and racking up views.
It is special access like this with boxing superstars such as Pacquaio, Floyd Mayweather, Canelo Alvarez, Mike Tyson and Tank Davis that propelled Seckbach to the milestone of one billion YouTube views. He officially hit the mark Nov. 3.
When Seckbach launched his channel in 2006, he covered the NBA while also working for other outlets and made such an impression that Lil Wayne sampled Elie’s interviews in a song about Kobe Bryant.
But after a 2008 Pacquaio interview went viral, Seckbach began focusing on boxing.
Meanwhile traditional media coverage of boxing declined due to tighter budgets. But boxing fans’ appetite remained, and Seckbach filled the gap with his man-on-the-street style and more-is-more strategy of posting up to 50 clips a day.
By 2018, Seckbach was more than a reporter. He was a full-fledged influencer and now has nearly one million social media followers. Media began covering him.
“He’s quirky, he’s always smiling and he could be the most influential reporter in boxing today,” wrote Los Angeles Times columnist Dylan Hernandez.
Ring magazine said Seckbach “is now recognized by more fans than some fighters.”
“I would like to thank so many people upon reaching this milestone,” Seckbach said. “First of all, the loyal EsNews viewers who I consider family — without them I wouldn’t even get close to one billion views.
“I’d like to personally thank all the fighters, including Mike Tyson, Canelo Alvarez, Manny Pacquiao, Gervonta Davis, Adrian Broner, Mikey Garcia, Vergil Ortiz, Ryan Garcia, David Benavidez, Deontay Wilder and Nate Diaz. I’d also like to thank trainers such as Robert Garcia, Eddy Reynoso, Joe Goossen and Derrick James who always opened their gyms to me.
“I’d like to give a special thank you to the Black Mamba himself, Kobe Bryant, for always granting me interviews and who taught me so much about the Mamba Mentality.
“Finally, I’d like to thank the EsNews team, including Tyler Foster, Justin Mozer, Ben Farooqi and everyone else who was always there to help.”
ThePostGame, the leading digital sports consultancy, has managed Seckbach’s channel since 2013.
“There is no one else like him,” says Justin Mozer, who has led ThePostGame’s effort. “The relationships he has built within the boxing community are incredible. We’re proud to have played a role in this journey and look forward to taking his brand to even greater heights.”
Source: EsNews