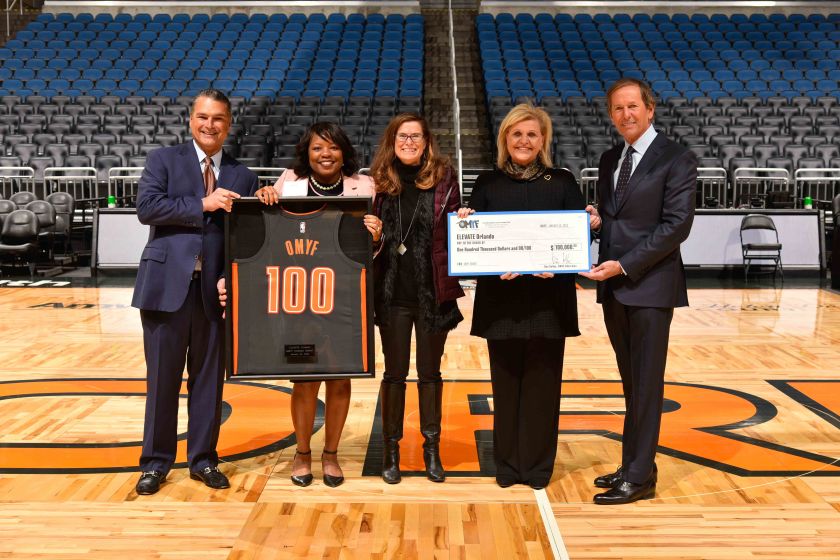 Thirty years ago, shortly after acquiring the Orlando Magic franchise, Rich DeVos had one request – please don’t call him the owner. “The real stake in the team is the community and people who are the fans who come to the games,” DeVos said at the time. “We’re just the caretakers of your team, and we’ll try to do a good job for you.”
Now, following its first three decades as caretakers, DeVos family members want to go a step further – formally thanking the community and fans with a new giving pledge called “30 grants for 30 years.” The effort will contribute a total of $3 million to 30 area nonprofit organizations over the next 18 months and seeks to invest in people and projects impacting youth, essential needs for families, and community enrichment across Central Florida.
“We can’t imagine better partners than Magic fans and the Central Florida community,” Magic Chairman Dan DeVos said. “We’re eager to come alongside nonprofits doing impactful work, providing financial support as well as an opportunity to shine a light on the great things these nonprofits do on a daily basis. It’s all to honor the great community we’re thankful to be in.”
As part of the 30 grants initiative, each selected nonprofit will be honored at its very own Magic game in the 2021-22 or 2022-23 season. Representatives will be honored during the game, featured on Magic digital platforms and given the chance to share their stories with fans of the franchise.
To tip off the giving, the Orlando Magic Youth Foundation – which is committed to helping children reach their full potential – has been selected to receive support as the initial grantee. The DeVos family seeks to “supercharge” this long-time partner’s efforts through the 30 grants initiative. Over the course of the coming months, 29 additional nonprofit recipients will be announced along with the game dates when they will be recognized.
“There are so many worthy nonprofits in this region that selecting only 30 nonprofits would be extremely difficult,” Magic Vice President of Shareholder Engagement Ryan DeVos said. “Given that OMYF is our first honoree, we’re able to empower their board to find even more recipients through their traditional grant-making process and have even more impact. We’re honored to serve in the role of team caretaker and eager to highlight the meaningful work led by these organizations in our community.”
Gifts from the 30 grants initiative will come from the DeVos family in partnership with the Orlando Magic.
Magic Media Contacts: Joel Glass | 407.491.4826 | jglass@orlandomagic.com; Trish Wingerson | 407.538.0892 | twingerson@orlandomagic.com
Source: Orlando Magic