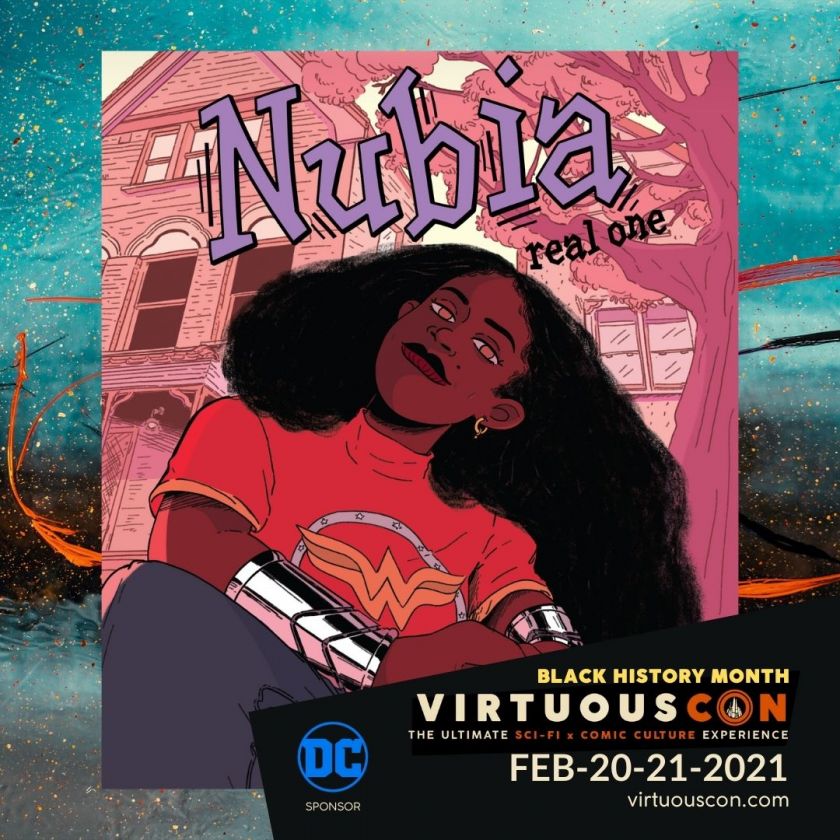 Virtuous Con announced today international comic book publisher DC is an official sponsor and virtual vendor of the virtual convention, launching live worldwide on February 20 and 21, along with several new special guests, including Eisner Award-winning artist Alitha Martinez (World of Wakanda, Immortal Wonder Woman) and Robyn Smith (Wash Day, NUBIA: Real One), who will both join previously announced guest award-winning writer L. L. McKinney (A Blade So Black, Immortal Wonder Woman NUBIA: Real One) on the panel Nubia is Back! The DC Storytellers who reintroduced Wonder Woman’s Sister. Live host and culture journalist Karama Horne (SYFYWIRE, theblerdgurlLIVE, NERDIST) will moderate the panel.
Founded by award-winning science fiction writer Cerece Rennie Murphy (The Order of the Seers, The Wolf Queen), Virtuous Con: Black History Month will feature indie artists and exhibitors in a live interactive virtual space dedicated to science fiction, fantasy, comic books, anime and more. “It feels really gratifying to have such an established institution in fandom coming to Virtuous Con and celebrating the excellence of Black and Brown creators with us!” Murphy says.
Martinez, Smith and Horne will join previously announced guests YA author Daniel José Older (Shadowshaper Cypher, Star Wars: The High Republic), artist, editor and founder of Megascope imprint John Jennings (Black Comix Returns, Kindred: A Graphic Novel), writer and H1 imprint co-founder Kwanza Osajyefo (BLACK, Ignited) and Nigerian comic creator and founder of YouNeek Studios Roye Okupe (E.X.O. The Legend of Wale Williams, Malika).
February will not be Virtuous Con’s premier convention. Murphy successfully beta-tested the event in October 2020 with a small group of attendees and vendors on the Remo platform, customized to support the convention. Virtuous Con still has a few tables left for vendors, but programming space is limited. For details about vending, panels and sponsorship opportunities, please visit https://virtuouscon.com/.
Please follow Virtuous Con on their social channels:
Twitter Facebook Instagram
ABOUT DC DC, a WarnerMedia Company, creates iconic characters, enduring stories, and immersive experiences that inspire and entertain audiences of every generation around the world and is one of the world’s largest publishers of comics and graphic novels. As a creative division, DC is charged with strategically integrating its stories and characters across film, television, consumer products, home entertainment, interactive games, DC UNIVERSE INFINITE digital subscription service and community engagement portal. For more information visit dccomics.com and dcuniverseinfinite.com.
ABOUT VIRTUOUS CON Virtuous Con is a company that produces and hosts virtual venues as a vehicle for independent science fiction, fantasy, and comics creators to grow an audience for their work. Each venue creates an authentic experience for attendees including virtual “booths” for vendors to interact live with attendees about their products and live panel rooms to interact in real-time discussions.
Source: Virtuous Con