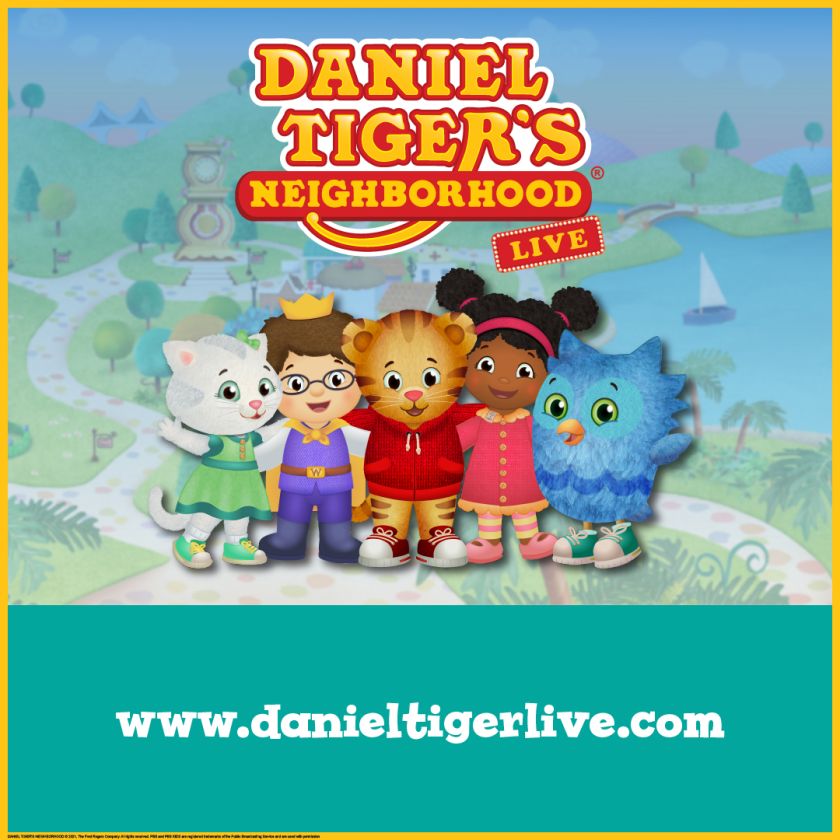 “Won’t you ride along with me?” Daniel Tiger and his friends from the beloved Emmy®-winning PBS KIDS series from Fred Rogers Productions are hopping aboard Trolley once again for DANIEL TIGER’S NEIGHBORHOOD LIVE!, the fan-favorite stage show from Mills Entertainment. Based on the popular animated series, the live show – now with enhanced safety protocols – will arrive in towns and cities throughout the country beginning January 2022 for grr-ific performances in more than 60 theaters.
DANIEL TIGER’S NEIGHBORHOOD LIVE! is an interactive adventure set in the Neighborhood of Make-Believe, featuring stories of friendship, helping others, and new experiences that will resonate with preschoolers and their families nationwide. Led by Daniel Tiger and his family, along with O the Owl, Miss Elaina, Katerina Kittycat, and Prince Wednesday, this heartwarming live theatrical production is filled with dancing and original music, including both new songs and familiar favorites.
“We are thrilled to bring the magic of family theatricals back to neighborhoods across the U.S. with DANIEL TIGER’S NEIGHBORHOOD LIVE!” said Simone Gianfrancesco, Senior Vice President of Live Touring for Mills Entertainment. “This iconic brand’s messages of kindness, community, and empathy are more meaningful then ever today and we are delighted to invite audiences to safely gather and enjoy the show together once again.”
“It’s been great working with Mills Entertainment to bring DANIEL TIGER’S NEIGHBORHOOD LIVE! to children around the country,” said Matt Shiels, Vice President of Business and Legal Affairs for Fred Rogers Productions. “We look forward to welcoming preschoolers and their families to the theaters so they can experience all the fun and adventure of a live performance starring their favorite characters from the Neighborhood of Make-Believe.”
The hugely-successful DANIEL TIGER’S NEIGHBORHOOD LIVE! touring production has been entertaining neighbors since 2016, playing to sold-out crowds across the country. The popular tours have visited more than 120 cities and played more than 200 shows throughout the U.S. and Canada.
Airing daily on PBS KIDS, the top-rated Daniel Tiger’s Neighborhood series follows the everyday adventures of 4-year-old Daniel Tiger and uses musical strategies grounded in Fred Rogers’ landmark social-emotional curriculum. Through imagination, creativity, and song, Daniel and his friends learn the key social and emotional skills necessary for success in school and in life.
The animated show has garnered a host of prestigious awards, including the 2019 Daytime Emmy Award for Outstanding Preschool Children’s Animated Series, the 2019 Parents’ Choice Gold Award for Television, and the 2018 Common Sense Media Seal of Approval. In 2020, the series was nominated for Outstanding Achievement in Youth Programming by the Television Critics Association. Apps, games, activities, and more from Daniel Tiger’s Neighborhood can be found on pbskids.org/daniel.
A full list of tour dates can be found at danieltigerlive.com.
Source: Mills Entertainment