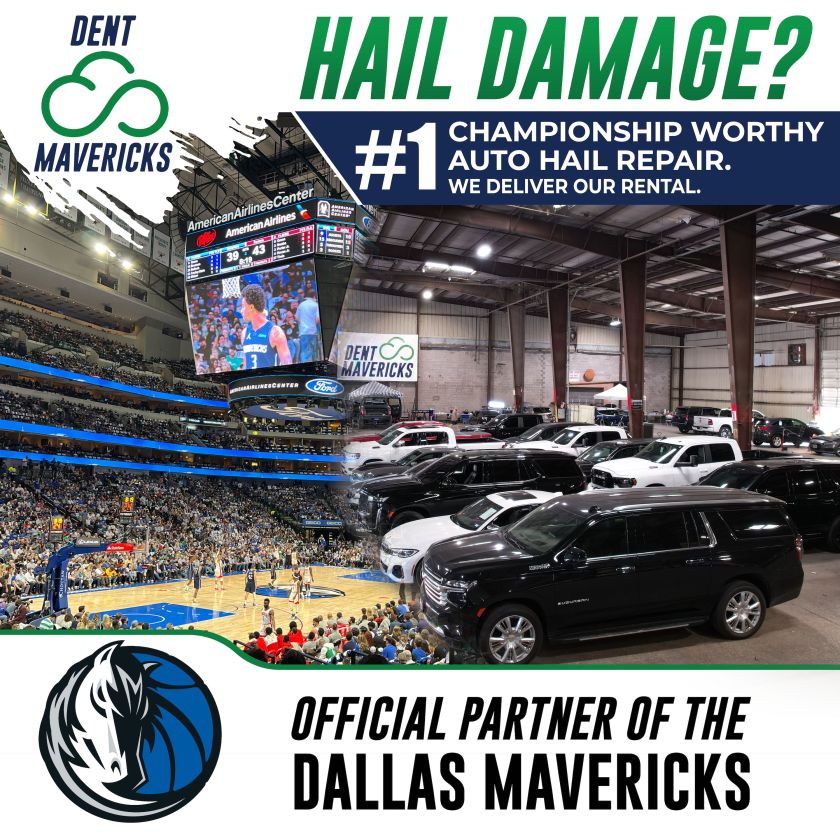 Dent Mavericks, LLC—the top-rated, independent, and locally owned Dallas-Fort Worth company that restores vehicles with hail damage to their previous condition without costly repainting—is proud to announce a partnership worthy of a championship, debuting their new collaboration with the iconic Dallas Mavericks. Putting up numbers that make it the largest independent business of its kind in the nation, the company’s aim to become the solution for auto hail damage hits new heights as Dent Mavericks become an Official Partner with the Mavs.
“We’ve always been just minutes away from American Airlines Center, but now, we’re getting even closer to the action on the hardwood,” said Barrett Roush, owner, and operator of Dent Mavericks. “Bringing together one of the biggest names in basketball with one of the fastest-growing storm damage repair companies is a clear winner. We’re proud to be partnered up with the Dallas Mavericks and look forward to opportunities on and off the court to show what we’re all about.”
Thousands of customers already know Dent Mavericks is the team to trust for fixing dents fast. Using their skilled process, staff members can fix a dent without the hassle and get drivers back on the road with their vehicle’s dented area looking like new—without costly repainting. Best of all, for those with full coverage insurance, the hail damage repair cost is $0 out of pocket, and under Texas law, insurance companies can’t raise rates for “acts of God” claims like hail dent damage. Dent Mavericks welcomes new fans to see how quick and easy it is to get paintless dent repair and get their cars in trade-in-ready condition.
Every aspect of the Dent Mavericks paintless dent removal experience is engineered for ease and simplicity, with a short turnover. Dent Mavericks helps drivers with every step of auto hail repair. First, a friendly representative helps evaluate the dent damage and assists with filing a claim. Once the vehicle owner uploads a copy of their driver’s license and their policy card to Dent Mavericks, a chauffeur brings a similar truck, SUV, or sedan courtesy loaner and takes the owner’s vehicle to the dent repair facility free of charge. There, trained technicians set about their quality restorations, removing unsightly signs of damage with skilled hail repair efforts. The refreshed vehicle is returned within seven business days, fully detailed, and with no out-of-pocket charges or hidden fees. Dallas Mavericks fans already take pride in and back their team; now they can take pride in knowing the team behind Dent Mavericks backs them—and their vehicles—all the way.
ABOUT THE DALLAS MAVERICKS: The Dallas Mavericks are a first-class global sports and entertainment organization providing memorable experiences for fans worldwide. The Mavs compete in the National Basketball Association as a member of the Western Conference and play at American Airlines Center under the direction of Coach Jason Kidd, General Manager Nico Harrison, CEO Cynt Marshall and Governor Mark Cuban. Since the inaugural season in 1980-81, the Mavs have won four division titles, two conference championships, and one NBA championship in 2011. In addition to on-court success, the Mavs are committed to making a difference in North Texas through community programs and the Mavs Foundation. For more information on Dallas Mavericks players, staff, stats, and tickets, visit mavs.com.
Barrett Roush
Barrett@DentMavericks.com
Claims@DentMavericks.com
(469) 547-1336 (Dent Mavericks Offices)
(469) 381-2266 (New Customers Line)
Source: Dent Mavericks LLC