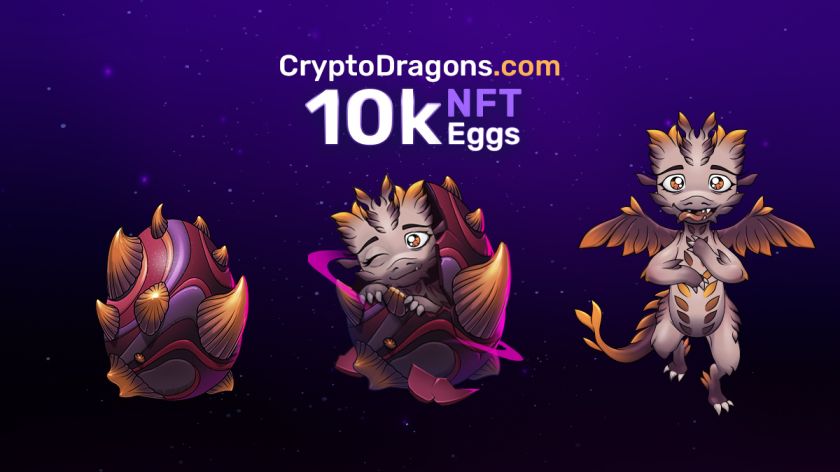 CryptoDragons’ second Reservation was a success: out of the 10,000 limited Eggs collection, 1,000 Eggs were available for the second round of reservations. Three different types of NFT Eggs were available:
On November 21, CryptoDragons set another NFT world record by selling an NFT worth 50 ETH during primary sales. All 1,000 Eggs were sold out overall, raising a volume of 559 ETH. A restriction of 5 Eggs per wallet was set.
“We are grateful to our community for another successful round. All 1,000 Eggs were reserved. This whole time we’ve been working hard to bring the best experience to our users and no doubt we will continue doing so,” says Nari, the CEO and co-founder of the project.
Earlier last week, famous French football player Paul Pogba announced his partnership with CryptoDragons. After the first round of reservations, the world champion posted on Instagram and Twitter announcing his collaboration and becoming the “Father of Dragons.”
It took less than ten seconds for the first 500 NFT Eggs to sell out on November 7, during the first round of reservations. The legendary dragon’s Egg went for 35 ETH. In addition, the Epic dragon’s Egg was quickly scooped up for 7 ETH and all 498 Random Eggs were gone for 0.2 ETH each. CryptoDragons raised 142 ETH in ten seconds, setting a record.
NFT dragon mania is gaining momentum, showing no signs of slowing down. According to the official website of the project, there will be more reservation stages. Follow official channels of the project on Discord and Twitter to not miss them.
CryptoDragons is a unique NFT project of collectible and breedable dragons that will hatch from the limited collection of 10K Eggs. There is a special type of Legendary Dragon, which will constantly earn 50% of the platform’s breeding commissions. The network generates high-quality NFTs utilizing proprietary, sophisticated algorithms, resulting in creative digital art.
Contact: Kristin Weissman | Attika Intelligence | Kristin@attikaintelligence.com | 321-203-9325
###