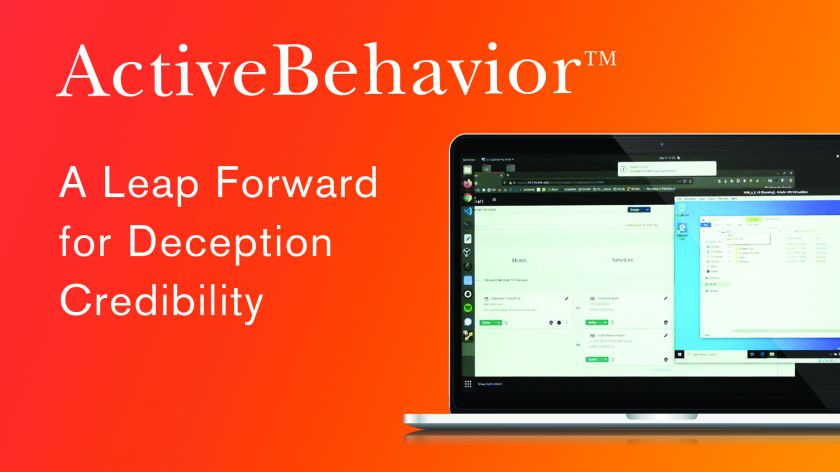 CounterCraft, the global leader in cyber deception-powered threat intelligence and active defense technology for organizations worldwide, including U.S. Department of Defense and NATO, announced the launch of a major advance in deception credibility today. ActiveBehavior™ is a human activity simulator capable of keeping deception decoys and environments looking credible, using a totally automated process of logging in and performing typical user activities.
With ActiveBehavior, potential attackers see a working environment in which actions, like browser history, user logins and network activity, down to the frequency, appear random and humanlike. The ActiveBehavior engine triggers random “user” activity during a predefined working time. The timing of activity is unpredictable, mimics real user behavior, and depends on the OS of the deception host as to the type of activity that is generated.
The technology takes about three minutes to deploy on the CounterCraft Cyber Deception Platform and only takes four clicks to set up and activate. It saves approximately eight man-hours per week per machine required to maintain the same level of activity manually.
“This is a groundbreaking moment in the history of honeypots and deception in general,” said David Barroso, co-founder and CEO of CounterCraft. “We’ve solved an age-old problem of how to keep deception environments looking real without investing lots of time and resources.”
ActiveBehavior™ is part of CounterCraft’s award-winning and innovative Cyber Deception Platform, which uses sophisticated deception environments to detect and alert unauthorized adversarial activity. Their technology is currently named as the only deception vendor in Gartner threat intel reports as well as being named a finalist in the 2021 SC Media awards for Best Deception Technology.
A revolutionary feature, over a year in the making
This feature is the result of a yearlong CounterCraft R&D program, combining existing components of the Cyber Deception Platform with the new and innovative ActiveBehavior control engine. This first iteration of the technology provides predefined usage patterns that are being expanded and will ultimately be completely user customizable.
User profiles within ActiveBehavior can be chosen in U.S. English and other localized language configurations. The technology is compatible with Linux & Windows. The ability to program specific actions is coming in the upcoming version releases.
About CounterCraft
CounterCraft is the next generation of threat intelligence. The CounterCraft Cyber Deception Platform offers active defense powered by high-interaction deception technology. CounterCraft detects threats early, collects personalized, actionable intelligence, and enables organizations to defend their valuable data in real time. Their award-winning solution, fully integrated with MITRE ATT&CK®, fits seamlessly into existing security strategies and uses powerful automation features to reduce operator workload. Founded in 2015, CounterCraft is present in London, New York, and Madrid, with R&D in San Sebastian, Spain. Learn more at www.countercraftsec.com.
Contact: Dan Brett craft@countercraftsec.com
Source: CounterCraft