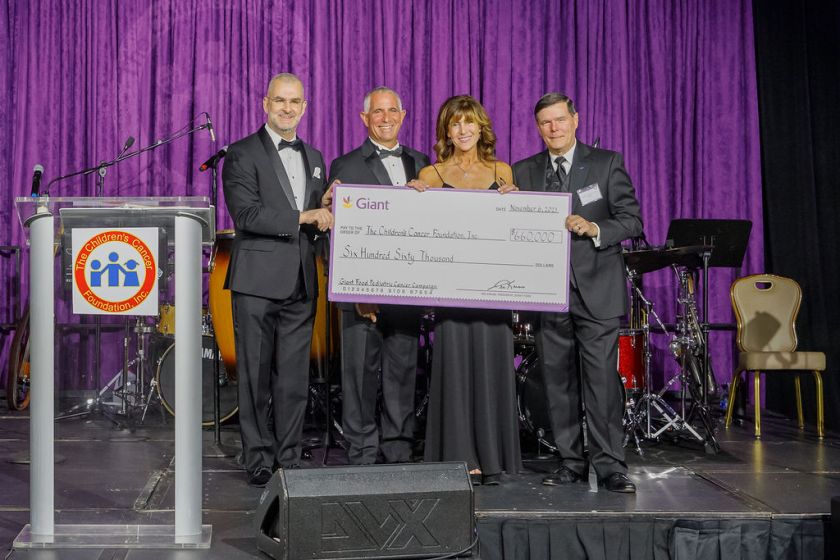 On Nov. 6, 2021, The Children’s Cancer Foundation, Inc. (CCF) hosted over 500 guests raising funds to support local pediatric cancer research and programs. Since 1983, CCF has raised funds in the Baltimore-Washington area to transform local hospital facilities, sponsor innovative programs, and provide local cancer researchers with critical funding to advance treatments and cures. More than 30 companies, individuals and foundations sponsored the Gala, raising over $375,000.
“This year’s gala was an opportunity to unite all the critical players working together in this dedicated community – the hospitals, the families, the researchers and the donors,” explains CCF President Tasha Museles, “and how all are necessary – especially during COVID. Cancer didn’t stop during the pandemic, and neither did we.” This year’s gathering felt particularly meaningful following the 2020 virtual gala. However, a livestream of the Gala was available for those who could not attend in person.
CCF awarded the highest honor of the night, the CCF Gift of Life Award, to Giant Food and its President, Ira Kress. Mr. Kress thanked Giant shoppers and store associates for the success of this year’s pediatric cancer campaign that raised a record $2.2 million, benefitting CCF and Johns Hopkins Hospital. As a result of this fundraising effort, Giant Food will donate over $660,000 to The Children’s Cancer Foundation, Inc. In addition to recognizing 2021 as their 85th year serving the region, Giant Food has contributed more than $20 million to CCF since the beginning of the partnership over 17 years ago.
The Gala invited several new major supporters for CCF, including Gala Presenting Sponsors Pepsi Cola and Dole. Companies JOH, Coca Cola, Service Distributing Inc., UNFI, Flowers Foods, and Bimbo Bakeries sponsored the Gala at the Partnership level. Ms. Museles finds such support encouraging, showing a trend that “international corporations recognize the powerful impact that small local non-profits can have in supporting children’s cancer research and programs within its community.”
More information about the Gala, CCF, and for a listing of researchers and programs that received their grant funding at the Gala, visit the CCF Website. The 38th Annual Gala is scheduled for Nov. 5, 2022.
Source: The Children's Cancer Foundation, Inc.