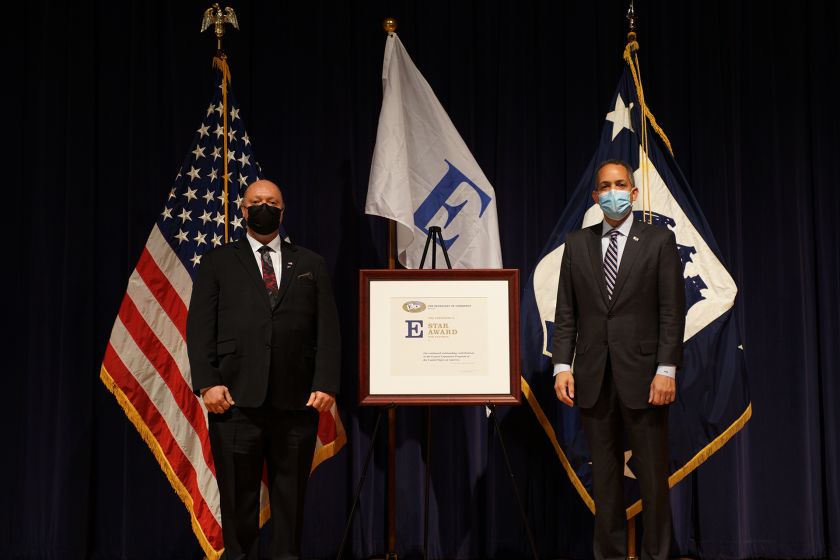 The U.S. Department of Commerce has awarded Cloud Microphones the 2021 President’s “E” Star Award for Exports. The President’s “E” Award is the highest recognition any U.S. entity can receive for making a significant contribution to the expansion of U.S. exports.
“Cloud Microphones has demonstrated a sustained commitment to export expansion. The ‘E’ Awards Committee was very impressed with Cloud Microphones’ extensive marketing through trade events, podcasts, social media, and other advertising. The company’s development of innovative products with export markets in mind was also particularly notable. Cloud Microphones’ achievements have undoubtedly contributed to national export expansion efforts that support the U.S. economy and create American jobs,” said US Secretary of Commerce Gina Raimondo in her congratulatory letter to the company announcing its selection.
Cloud Microphones designs and manufactures high-quality ribbon microphones and microphone preamplifiers. The company’s patented Cloudlifter Microphone Activator has garnered several industry awards and is used by audio professionals in recording studios, on concert stages, in broadcast booths, in podcasts and for livestream audio. Cloud won the President’s E Award for exports in 2016 and is honored to now receive the E Star Award for exports.
“Working with the US Commercial Service has been instrumental in reaching our goals in foreign markets, helping us increase our US made exports by several hundred percent,” said Rodger Cloud, Co-Founder and CEO of Cloud Microphones. “This is very satisfying as this new revenue comes into the United States, and particularly Arizona, and stays here due to our local Tucson, Phoenix, and Navajo Nation supply chain.”
U.S. companies are nominated for the “E” Awards through the U.S. Commercial Service, part of the Department’s International Trade Administration. The ITA maintains offices in over 100 cities across the United States and in 75 markets around the world.
The award was presented at a Washington, D.C. ceremony by Deputy Secretary of Commerce Don Graves who said, “Over a decade ago, Cloud Microphones created a partnership with Tooh Dineh Industries, founded by members of the Navajo Nation for circuit board manufacturing and assembly. Cloud Microphones could’ve outsourced the fabrication of their metal parts elsewhere, but they insisted on doing it locally. Their collaboration brought good paying jobs to a marginalized community where unemployment levels average 47%.”
In summing up the honor, Rodger Cloud said, “This E Star Award and recognition by Secretary Raimondo on behalf of the President of the United States not only belongs to Cloud Microphones, but is shared with the wonderful people at the dozens of subcontracting companies across Arizona, the Navajo Nation, and the Southwestern US. These are the families who help to instill quality in our products.”
Media Contact: Music Marcom, Martina McConnon: martina@musicmarcom.com
Source: Cloud Microphones