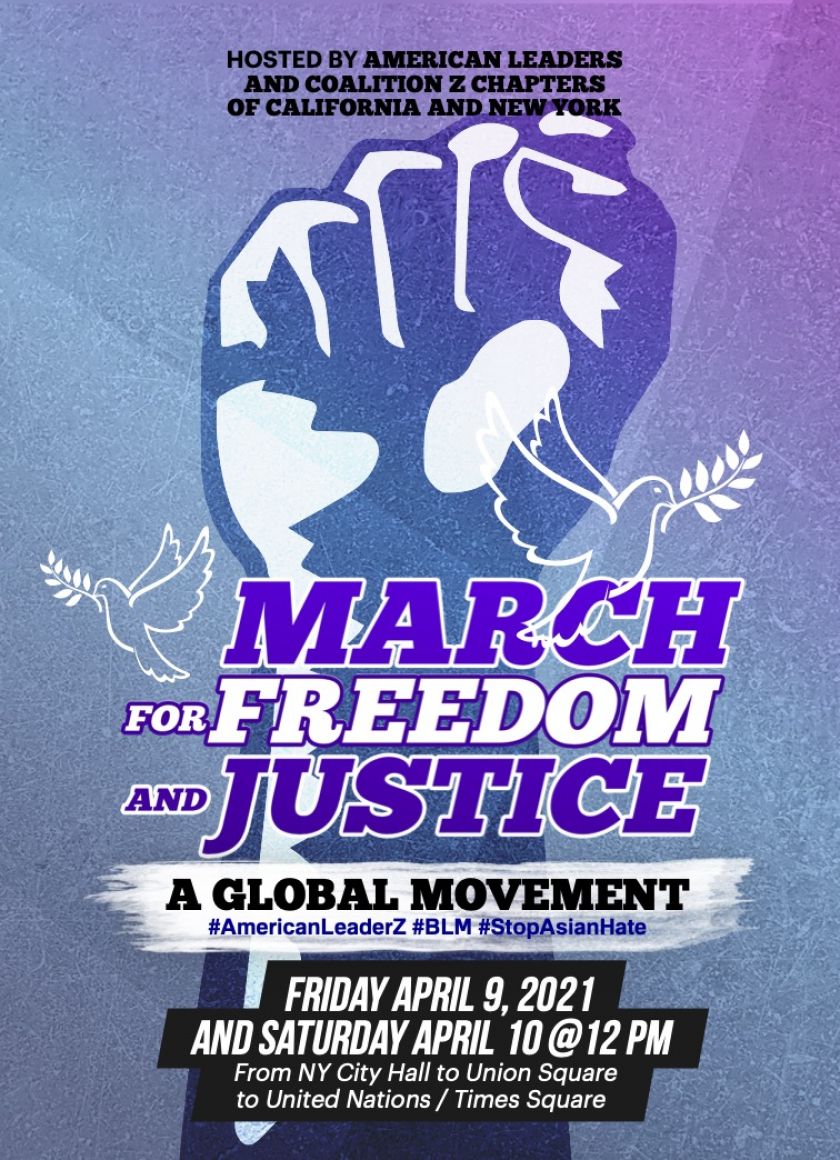 Martin Luther King Jr. famously spoke: “Injustice anywhere is a threat to justice everywhere.” Truer words have never been spoken, and the country finds itself amid a slew of injustices from every corner of the nation. Everyone has seen the headlines, read the stories, and placed support imagery on their Instagram stories; but being aware of a problem and stopping the spread of a virus are two very different things. While the world battles the COVID-19 pandemic, society faces a secondary pandemic in racial injustice and Asian hate.
To champion meaningful change, AmericanLeaderZ and CoalitionZ are proud to announce the Stop Asian Hate March for Freedom and Justice to elevate minority voices, combat hate, and call on both public and private organizations to use AmericanLeaderZ’s 10 Demands as the framework for systemic change. The rally and march will commence at noon on Friday, April 9, and Saturday, April 10, following a route from NY City Hall to Union Square to United Nations on Friday, and NY City Hall to Union Square and Times Square on Saturday.
AmericanLeaderZ, led by Fernando Lorenzo, is a global movement that began after the murder of George Floyd, banding people of all ages, races, communities, and beliefs together to fight for the same purpose: equality. As violence against minority groups has continued across the United States over the past year, AmericanLeaderZ has brought forth 10 demands for both public and private organizations to take to stop systemic racism, commit to equality, and shatter barriers facing minorities every day. The #10Demands are as follows:
The Stop Asian Hate March for Freedom and Justice is in response to the violence against Asian communities in the United States. AmericanLeaderZ is calling on New Yorkers of every walk of life to march hand in hand, calling on the adherence to these #10Demands to provide the basis for a more equitable and fair global system.
“As an Asian American who has experienced many systemic injustices throughout my life, I want to follow the footsteps of great leaders like Martin Luther King Jr, Greta Thunberg, Elon Musk, and Bernie Sanders – to lead and provide a more equitable society by calling for systemic reform against the injustices that continues to plague and divide our society. I am fighting for a better future.” — Fernando Lorenzo, Founder
To learn more, visit: www.ZAmericanLeader.com
GoFundMe
Source: AmericanLeaderZ