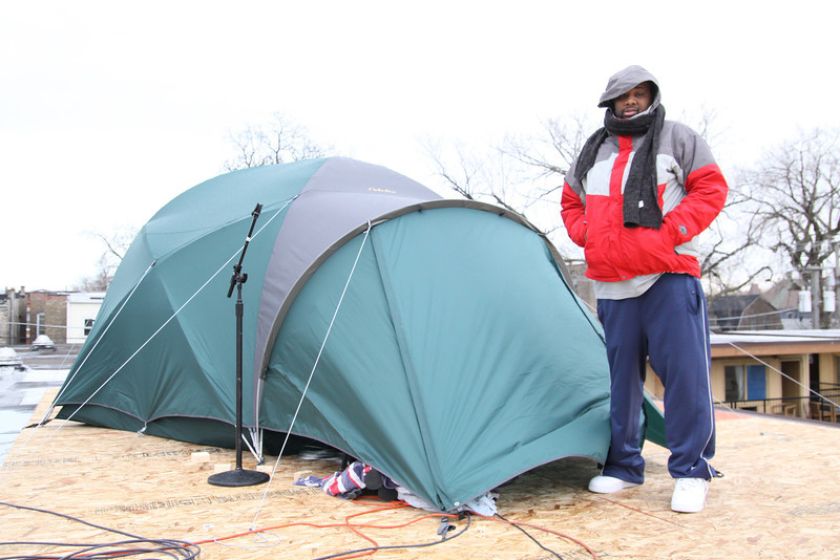 Executive Director Pastor Corey B. Brooks will mark the 10th anniversary of Project H.O.O.D. with a 100 Day Campout Against Gun Violence beginning on Nov. 20, 2021. *The kickoff event begins at 4:00 p.m. at Project H.O.O.D.’s outdoor space at 6615 S. King Drive, Chicago, IL 60637.
The not-for-profit organization Project H.O.O.D. needs $35 million to build a state-of-the-art community center on the south side of Chicago to expand services and replace a crime-ridden motel that once stood there.
In 2011, Pastor Brooks camped out for 94 days on the roof of a dilapidated motel that embodied the neglect, crime, and violence of Chicago’s Woodlawn community. While on the rooftop, he conceived Project H.O.O.D. with the mission of stopping senseless violence and raising the community out of poverty. He raised enough money to buy and demolish the motel and Project H.O.O.D. has served thousands of people.
Project H.O.O.D. has a proven track record of stopping violence before it starts, providing job training and certification, entrepreneurial resources, and other programming to change the economic status of at-risk youth and individuals. A new facility to house all Project H.O.O.D.’s expanding programs would increase impact.
“Our community can no longer wait,” said Brooks, also the founder of New Beginnings Church of Chicago. “We lose lives every day to gun violence and can stop this senseless killing. We can do it, but we can’t do it alone. I am asking all people of goodwill to help Project H.O.O.D. and the people in Chicago.”
A host of CEOs, leaders, community stakeholders, and celebrities will join Pastor Brooks on the rooftop as they commit to spending at least one night on the roof. The outdoor campout is being constructed atop of a replica of Project H.O.O.D.’s new community center, the Leadership and Economic Opportunity Center, at 6615 S. King Drive, Chicago, IL 60637.
*At 10:00 a.m., earlier in the day, is a great opportunity for b-roll of Project H.O.O.D. in action. The Thanksgiving Food Giveaway is sponsored by Pepsi, Barilla, Conagra, Unilever, and Jewel-Osco. Pastor Brooks will also be available during the Thanksgiving food giveaway before he spends his first night on the roof.
###
Pastor Corey B. Brooks: Founder and Senior Pastor of New Beginnings Church of Chicago and founder and CEO of Project H.O.O.D. Communities Development Corporation has been featured on numerous networks and in various news stories. Brooks has become a leading voice and presence in the fight against the violence gripping Chicago’s poorest neighborhoods. He established New Beginnings Church of Chicago in November 2000 in the heart of Chicago’s most dangerous neighborhood. This opportunity was his first glimpse into the despair in the city of Chicago served as the catalyst to his ongoing efforts to date.
Media Contact: Brian Alexander, brian@projecthood.org, 773-354-8483
Media Resources: To find high-resolution images, a list of participating leaders and influencers, and other resources, please visit projecthood.org/press. Tent-A-Thon main event page: projecthood.org/tent-a-thon
Source: Project H.O.O.D.