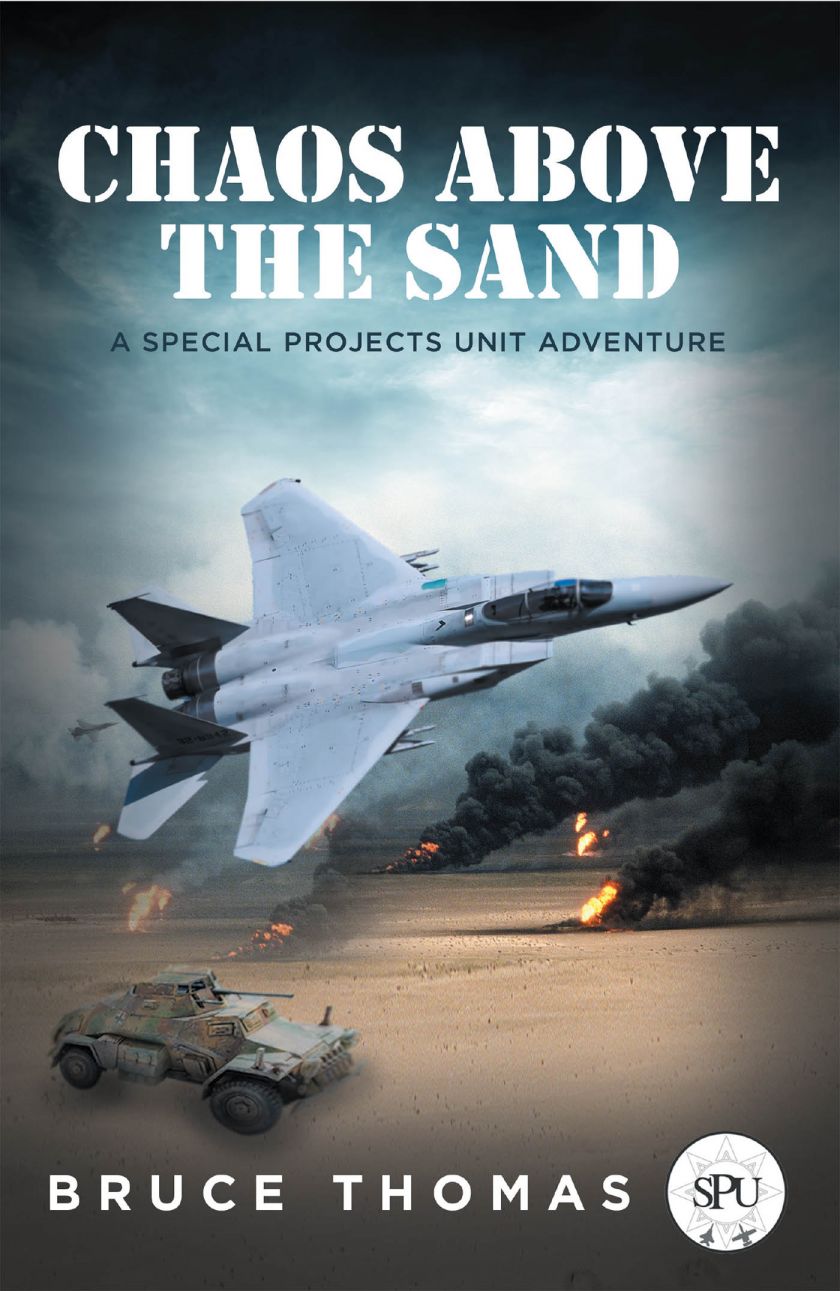 Bruce Thomas, a retired US Air Force fighter pilot and a retired Captain of Southwest Airlines, has completed his most recent manuscript.   “Chaos above the Sand” is a thrilling novel that tells the story of Wild Bill and Vector, the Special Projects Unit leaders.  Their secret mission is to prevent foreign actions that could harm America’s peace and order.
Bruce writes, “Iran 2010. The Iranian High Council has decided that today is the day that their fighter pilots will attack. With a large group of fighter aircraft poised to cross the border into Iraq, the only thing standing in the Iranians way is Wild Bill Eddy’s four F-15C aircraft. With lightning speed, the battle rages in the sky above Iraq. Iran’s desire to control the Middle East sets this fast-paced, multilayered story in motion.
Germany, May 1944. Field Marshal Erwin Rommel has sent his most trusted representatives to steal vast treasures from Hitler’s hidden storage location. Once these were obtained, they intend to use the horde to fund their escape from the war that has devastated Germany and made them lose faith with the Führer. A mix of attacks, setbacks, and terrible timing cause the treasures to be lost when the Allies attacked Normandy on June 6, 1944.
From the beginning, the Special Projects Unit is thrown into this thriller with traitors, spies, and patriotic soldiers. The SPU director, William ‘Wild Bill’ Eddy, along with his best friend, Assistant Director Mark ‘Vector’ Jones, race to solve the clues to who is supplying top secret information to the Iranians. With villains and traitors on every page, the SPU must decipher the clues and save the USA from a fast-approaching military defeat. Clues to the lost World War II treasure become mixed into the story of the building and hiding of the SPU. This yarn is the tale of the development and birth of the SPU.
As Air Force Academy graduates, Wild Bill and Vector have a bond that transcends work. But will they be able to solve all of the clues to stop the Iranians from taking over the Middle East? Chaos Above the Sand is a prequel to Bruce Thomas’s first book, The Hope of the South.”
Published by Fulton Books, Bruce Thomas’s book is a gripping fiction about a nation’s battle against the threat of hostile attackers. Woven with action and thrilling encounters, readers will discover how these two friends piece together the mysteries surrounding the chaos.
Readers who wish to experience this thrilling work can purchase “Chaos above the Sand” at bookstores everywhere, or online at the Apple iTunes store, Amazon, Google Play or Barnes and Noble.
Please direct all media inquiries to Gregory Reeves via email at gregory@fultonbooks.com or via telephone at 877-210-0816.
Source: Fulton Books