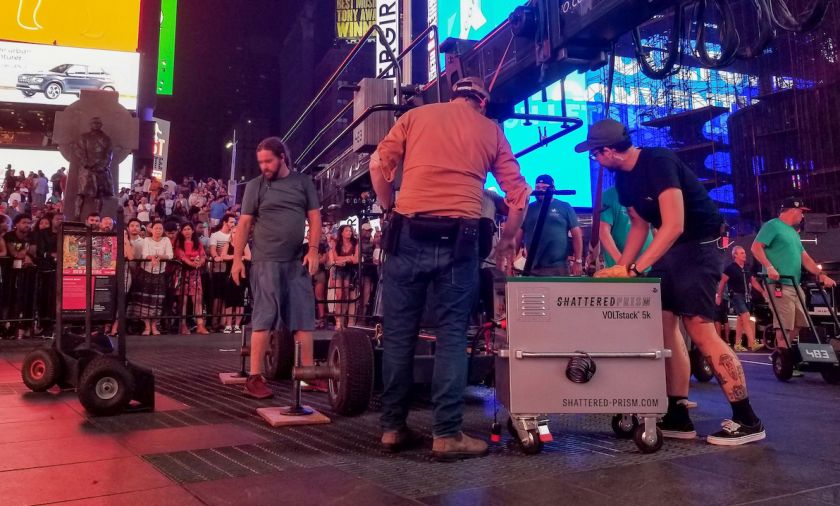 In 2019, New York passed the most ambitious climate goals in the country, including net-zero carbon emissions by 2050. “We fully support these critical initiatives to slow the effects of climate change,” says Shattered Prism’s CEO Parker Shippey, “but we can’t place the burden of innovation on businesses whose focus must remain on productivity.”
Parker founded Shattered Prism in 2015 to offer waste-reducing solutions by promoting adoption of new technologies. “Many industries have grown accustomed to traditional tools and processes that are inefficient compared to today’s technologies,” he says. The company now distributes sustainable equipment – including e-generators and LED lights – to industries like Film & TV and Live Events, with locations in New York, Atlanta and New Orleans.
“E-generators are a key piece of a sustainable future,” says Parker. “So many industries rely on portable power to exist, and particularly the film/TV industry. We can’t expect these businesses to achieve green goals without offering viable solutions for power on the go.”
The film & television industry is notorious for its generator use. According to Emellie O’Brien, CEO of Earth Angel, productions consume, on average, 250 gallons of diesel fuel per shooting day, but that number can balloon to 1,000 gallons per day on the largest productions. “Investing in alternative energy technologies, like solar generators, is vital unless we want to continue to power our sets by emitting the same amount of carbon dioxide daily as the standard house emits in one year,” says Emellie.
Shattered Prism’s primary product is the VOLTstack portable, electric power station. “We have several size options available depending on the needs of our clients,” says Parker. “When it comes to developing and distributing new technologies, the goals of our customers must come first. A big part of that is offering complimentary power consultation services for first-time clients to ensure they have a positive experience with our equipment.”
Having worked in the film & television industry for more than a decade as an electrician and lighting designer through Local 52, Parker is intimately familiar with the demands of the booming New York film market. One important element of those objectives is maintaining good relationships with the neighbors.
“The ability to film productions in New York is a privilege. The locations our city has to offer provide the backdrop for countless iconic scenes in cinematic history. It is critical we maintain a positive relationship with the community so filmmakers can continue to feature these landmarks in their productions.”
One challenge to those good relations is the disruptive force of productions filming on-location around New York, specifically with respect to fumes and noise from diesel generators. “I’ve sat in on city council meetings where parades of residents complain about tripping over cables, or inhaling gas fumes.”
Shattered Prism’s e-generators provide a silent, clean alternative to diesel generators, enabling productions to mitigate location fatigue while moving closer to sustainability targets set by New York.
But what about recharging? “Our e-generators can be recharged from the grid or with e-vehicle charging stations in a few hours, but we are aware that New York’s grid is currently coal-powered. E-generators are more efficient than diesel generators, in that they don’t waste any of the energy. But, ultimately, the solar-compatibility of the VOLTstacks is a critical component to achieve net-zero emissions, and is a feature we’re very proud of.”
The company’s fleet currently includes 2kWh and 5kWh electric power stations. “And we recently welcomed the arrival of larger, 60kWh units,” says Parker. “These 60kWh units are the largest e-generators in the U.S. and we are thrilled to launch these revolutionary tools in the place we call home: New York.”
Press Contact: info@shattered-prism.com / 601-207-0592
Source: Shattered Prism