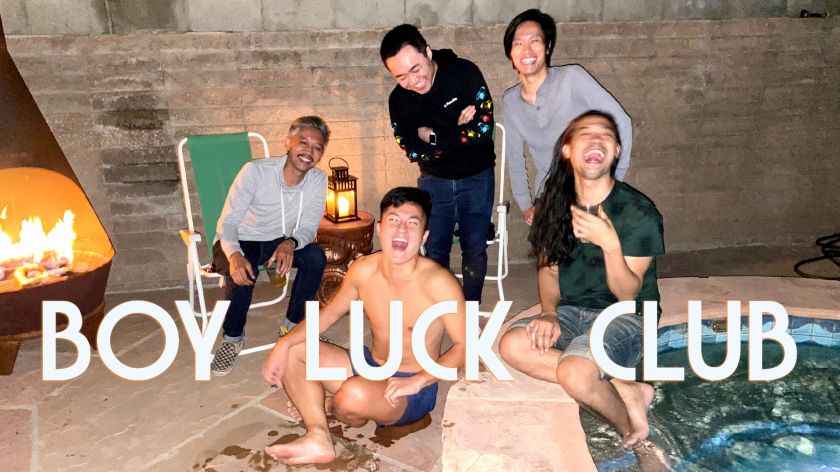 AsianAmericanMovies.com, (AAM.tv) the first streaming destination featuring all Asian-American-focused content, streams the groundbreaking comedic TV series Boy Luck Club featuring an all Gaysian (Gay + Asian) cast, which has never been done before. The full first season streams now on AAM.tv, Amazon Prime and Tubi.
The project, which is co-created by filmmaker Quentin Lee (Comisery, White Frog) and comedian Kit DeZolt (Confessions of a Teenage Jesus Jerk), centers on six gaysian best friends who get together every Friday night for cocktails on Zoom-styled online chats to offer support to help each other navigate life under quarantine. Totally unscripted, each episode is an entirely improvised conversation between the six actors and completely candid and no holds barred.
In addition to creating the series, Kit DeZolt pulls double duty starring as JJ, a yoga instructor who gathers his chosen family for their weekly Friday night chat sessions, doling out love and support while unexpected drama often comes into play during these calls. The first season of Boy Luck Club features actors Eric Cheng (Boston production of M. Butterfly), Stanson Chung (Divorced: The Hip Hop Musical), Xavier Durante (The Shutdown), David Vi Hoang and Justin Madriaga (Netflix’s Nailed It! Holiday!).
Speaking about the series, “As a gay Asian-American adoptee, I hope to contribute my perspective by bringing Asian, LGBTQ+ and/or adoption stories to life through satire and other comedic mediums,” said Kit DeZolt.
Quentin Lee adds, “I began making my first film when I graduated from Berkeley in 1992 and my initial goal was to create representation for gay Asians. Three decades later, the representation of LGBTQ+ Asians is still virtually non-existent. As a Gen-X artist meeting up with Kit, a millennial, immediately inspired me to create Boy Luck Club, the first gay Asian-American TV series.”
ASIAN AMERICAN MOVIES (AAM) offers a curated slate of acclaimed Asian-American movies, documentaries, short films and shows for people on the go. It is available on the web and via Android and iOS devices. Boy Luck Club the series premieres on SVOD on AsianAmericanMoves.com and TVOD on Amazon Prime Video.
Boyluckclub.com | #boyluckclub.com | #gaysiansfriendsforever
Source: AAM.tv