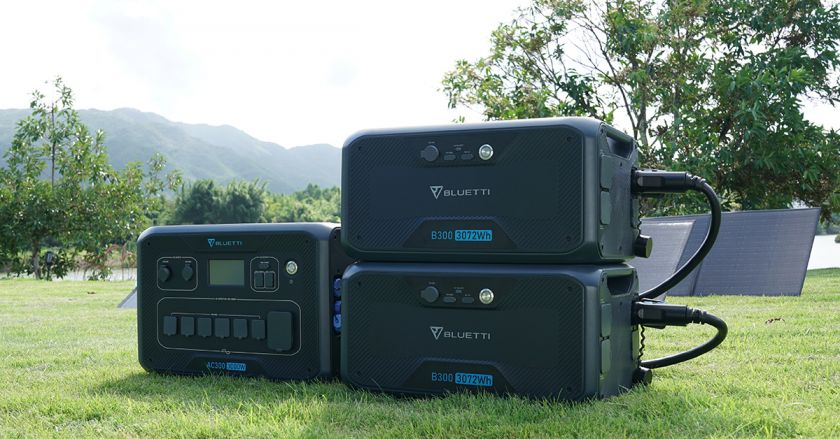 Two months ago in July 2021, Bluetti announced their release of an industry first, modular solar power station – the AC300 and its accompanying LFP battery module, the B300 (3,072Wh).
Word spread fast, and before anyone knew it, the AC300 was trending throughout the United States.
Now, at long last, after months of waiting, the AC300 and B300 are finally here.
Now both products are available for order.
Solar Vs. Gas Generators (Why Should Everyone Go Solar?)
Solar Generator:
Gas/Propane Generator
A solar generator uses free energy from the sun instead of using costly dirty fossil fuels.  It’s available to get this free energy continuously from the sun for the lifespan of  solar panels, which is usually around 25 to 30 years. And, unlike most conventional fuel or gas generators, solar generators have absolutely no moving parts and do not use a liquid fuel. This means the ongoing costs will be low.
Aside from the financial gains of using a solar generator, choosing this green technology over other fossil fueled systems has various environmental and health benefits. Gas powered generators lead to air pollution alongside noise pollution, and while the latter is simply annoying, the former contributes to climate change and respiratory disease.
Last but not least, most heavy duty gas powered generators can weigh a lot, sometimes up to 250 pounds. In comparison, Bluetti’s AC300 weighs a mere 44 pounds and the B300 74lbs.
Where To Buy The AC300 & How Is It Delivered?
BLUETTI products can be bought on the official website: https://bluettipower.com
For one-stop shopping, a total amount of a thousand bucks can be saved when buying certain AC300 solar bundles.
Orders will be delivered in 3~5 weeks from purchase date, according to Bluetti’s statement.
If you are looking for raw power, then it’s quite simple. AC 300 is an ideal option, get the power here: www.bluettipower.com
Press Contact:
Amanda@bluetti.com
Source: BLUETTI POWER INC