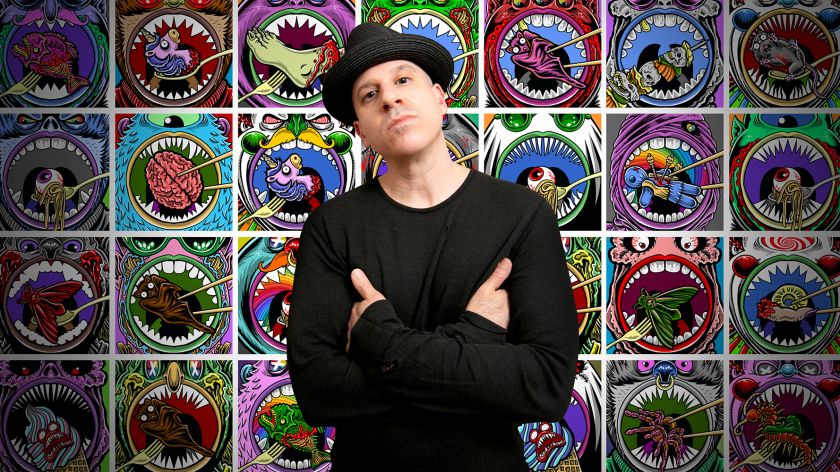 Rockstar-turned-bestselling-artist Alan Robert, best known for being the bassist and primary songwriter for the popular rock group Life of Agony and for creating “The World’s Creepiest Adult Coloring Book” The Beauty of Horror, has launched his very first NFT collection called Monster Chompers. The pre-sales whitelist kicked off on Halloween, allowing fans to reserve their spots to mint Monster Chompers to the Ethereum blockchain. Robert partnered with top software agency Way Too Digital to develop the limited, one-of-a-kind, digital collectibles. Way Too Digital is the same group behind several high-profile projects for Gary Vee, NTWRK and Cardano. Check out Monster Chompers NFTs at https://monsterchompers.com.
See the video: https://vimeo.com/622763238
Each non-fungible token has a varying set of character traits that determines its rarity. First off, there are multiple monster species available, such as vampires, werewolves, mummies, zombies, and more. Secondly, each character is depicted chowing down on a bizarre selection of meals from the All-Nite Eatery Menu. Delicacies include Spaghetti & Eyeballs, Rancid Ratatouille, and Spicy Shrunken Heads Skewers, to name a few. All elements were hand-drawn by Robert and randomly generated using algorithms to produce 10,000 unique combinations.
“This NFT collection has been an absolute blast to work on. Monster Chompers takes two of my favorite things: horror and comedy, and throws them in the blender together to produce something hilarious, twisted and completely unique,” said Alan Robert. “Working closely with the fantastic team at Way Too Digital has been an awesome and eye-opening experience, too. I’ve learned so much about how NFTs are revolutionizing the digital art space. It’s such an exciting time and now that we’ve launched our Whitelist, we’re one step closer to unleashing Monster Chompers on the world. This collection is just the beginning for the brand, too. There are already plans in the works to expand the IP into other media as well.”
“This is by far our most exciting and fun generative NFT avatar project,” said Way Too Digital’s founder and CEO Agustin Rodriquez. “It has been an amazing experience working with an artist of Alan’s stature and every time we receive new materials from him, it makes us tickle and smile. He not only manages to create a strong emotional connection between his artwork and the community, but also with people like us who are new to the horror genre. We’re also very happy that Monster Chompers will be the first project launching on our new white-label NFT platform with a built-in secondary market. That way, it keeps the whole user experience on-brand, similar to how NBA Top Shop did with sports.”
Website: https://www.monsterchompers.com
IG: https://instagram.com/monsterchompers
TW: https://twitter.com/monsterchomp3rs
FB: https://facebook.com/MonsterChompers
Discord: https://discord.gg/C7Evgnsf
About Alan Robert
Alan Robert’s New York-based band Life of Agony began over three decades ago. The group’s River Runs Red debut was hailed by Rolling Stone as one of the “Greatest Metal Albums of All Time”. Life of Agony has released six studio albums to date and has sold over one million records worldwide. A new, full-length documentary about the band titled The Sound of Scars will be released in early 2022. Outside of music, Alan Robert is a prolific artist and visual storyteller, named “The King of Horror Coloring Books” by Revolver Magazine (https://bit.ly/3AE5BCa). In 2016, his hit adult coloring book series The Beauty of Horror exploded on the scene and immediately became an Amazon #1 bestseller. It was featured in The Wall Street Journal (https://www.wsj.com/articles/BL-SEB-97154) and GQ (https://bit.ly/3CFuRbW). Its Christmas claymation video went viral with 7.5 million views (https://youtu.be/c_iBG0ZgmPo) and the latest release in the series The Beauty of Horror 5: Haunt of Fame is a twisted homage to some of pop culture’s most beloved celebrities. It was released in August 2021 by IDW/Penguin Random House and took Amazon’s #1 Hot New Release spot in multiple categories. Alan Robert studied cartooning and illustration under the guidance of legendary Thor artist Walt Simonson at The School of Visual Arts in New York City, where he attended on scholarship.
About Way Too Digital
Way Too Digital is a software development agency specialized in building digital products using emerging technology. Nowadays, it has been focused on dApps for the blockchain space: DAOs, NFTs, Metaverse and Smart Contracts for clients such as Gary Vee, NFT42, Cardano, NTWRK, Pixelynx, Crucible, SpankChain and many other interesting startups.
Press Contact:
Freeman Promotions
235 Edwards Ave.
Long Branch, NJ 07740freeman@freemanpromotions.com
Phone: 336.509.8377
Source: Way Too Digital