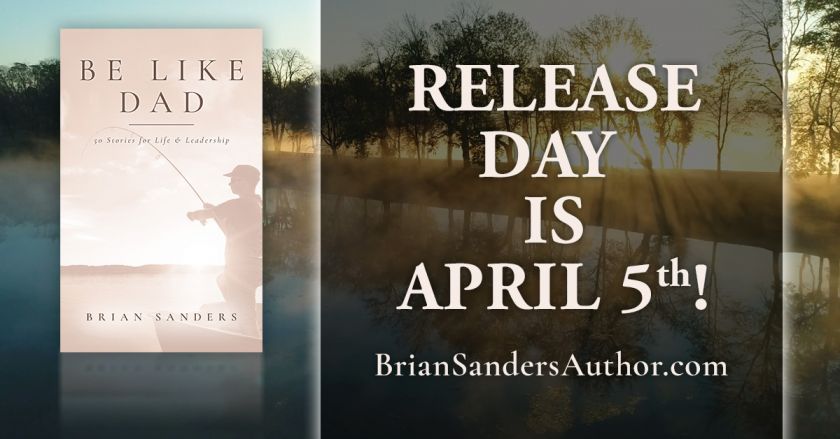 Positive Alternative Radio is partnering with JPL Books to publish the second book written by its Executive Vice President, Brian Sanders. The new book, Be Like Dad: 50 Stories For Life & Leadership, features lessons Sanders learned from his father, Marion “Jack” Sanders while growing up in rural Louisiana.
Pre-orders for a limited edition, signed copy of the book are being accepted now at www.briansandersauthor.com, and the book releases and ships starting April 5th, when it will also be available through Amazon, PAR has announced.
“Fathers can impact the lives of their children like no one else,” Sanders said. “My dad certainly shaped who I am and there are many valuable lessons from my time with him that have inspired me. So, it made sense to share them with others.
He noted that Be Like Dad: 50 Stories For Leadership & Life will be printed in a format suitable for gift giving and ideal for Father’s Day, graduation and all other occasions.
Sanders’ first book, Leadership Endurance, became an Amazon #1 Best Seller in the Christian Leadership category soon after its launch in June 2019.  Since then, Sanders has engaged thousands of his readers through social media and his website, BrianSandersauthor.com. He also has been featured by local and national media, spoken at the National Religious Broadcasters convention and a variety of other live venues, as well as video conference appearances during the COVID-19 pandemic.
Sanders, who graduated from Northwestern State University in Louisiana with degrees in both History and English, first worked at a radio station while still in high school. During college, he became a pastor and attended seminary, where he became involved with its Christian radio station. After spending 14 years with that station, he joined PAR, whose home base is in Blacksburg, Va. He and his wife, Kayla live in the New River Valley of Virginia.
INTERVIEW Brian Sanders:
Sanders is currently available for speaking engagements and media interviews. For more information, please call PAR at (800) 627-9747 or email info@parfm.com.
###
About Positive Alternative Radio (PAR)PAR is a non-profit ministry founded in 1985 by Edward Baker’s father, the late Dr. Vernon H. Baker and his mother, Virginia. Today, PAR owns and operates stations and networks in key markets in Virginia, eastern Tennessee, West Virginia, Ohio, North Carolina and South Carolina. They include WCQR, broadcasting from Johnson City, Tenn.; Walk FM, Ashland, Ky.; Spirit FM, Lynchburg, Va.; Joy FM, Winston-Salem, N.C. and Your ‘PER, Fredericksburg, Va. The stations provide adult contemporary and Gospel music, as well as Christian content available across a variety of digital platforms. PAR is a certified Best Christian Workplaces recipient.
Source: Positive Alternative Radio