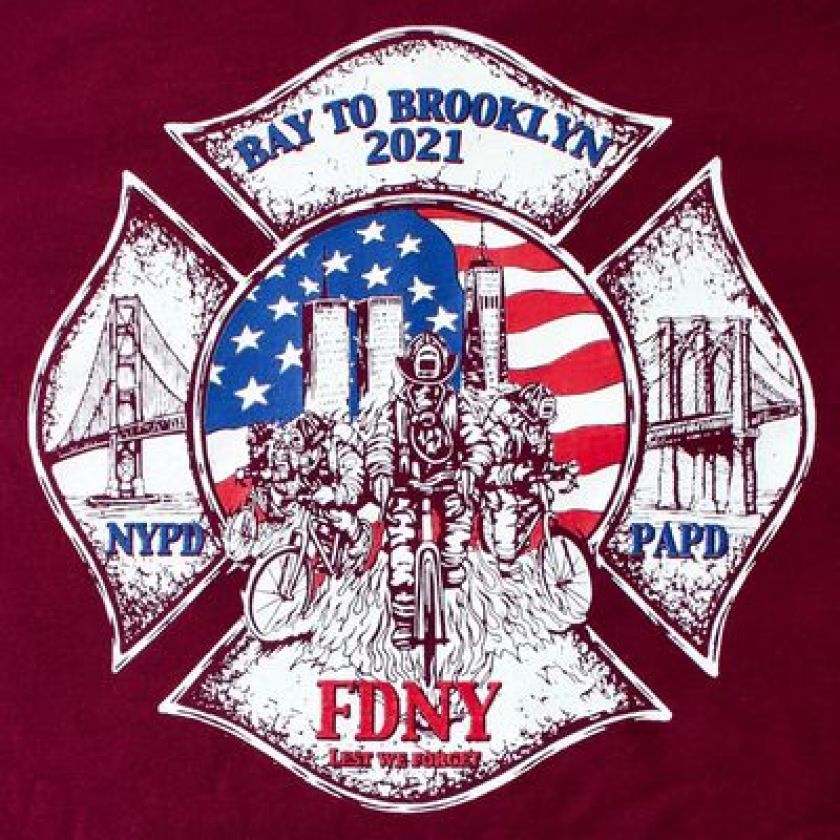 On Aug. 1, 2021, a group of cyclists left Santa Clara, California for the San Francisco Golden Gate Bridge to officially start a 3,800-mile ride across America. The goal is to arrive in New York City and the Brooklyn Bridge in time for the 20th Anniversary of 9/11.
The team of ten cyclists along with three support chase drivers is made up of active and retired firefighters and military veterans. They are riding to remember and honor those who made the ultimate sacrifice that fateful day as well as all first responders, military, and health care workers who continue to serve on the front lines today.
Any donations raised will go to support the Gary Sinise Foundation and the Santa Clara Firefighters Foundation.
Bay to Brooklyn 2021 will be the second ride of its kind. The first was made in 2011 for the 10th anniversary, by Santa Clara Fire Department (SCFD) firefighters Darrell L. Sales, Dave Lombardo, and support chase driver Fred Belligan. Darrell Sales, now retired, had planned the 2011 ride and has taken the lead again for 2021.
When Darrell was asked what made him want to make this ride again, his reply was simple: “Why not, our mission hasn’t changed. All of us watched the events unfold on September 11th, 2001 and we haven’t forgotten the 343, this is why we ride.” Assisting Darrell are fellow retired SCFD firefighters, Frank Walsh and Jeff Provancher.
This will not be a relay; each cyclist will average 80 to 100 miles a day, testing the cyclists both physically and mentally. The ride will take them north following part of the historic Oregon Trail and the Lincoln Highway.
Contact: Anthony Maffei – Phone: 650 867-7994 – Email: Anthonymaffei@comcast.net
Source: BAY2BROOKLYN2021