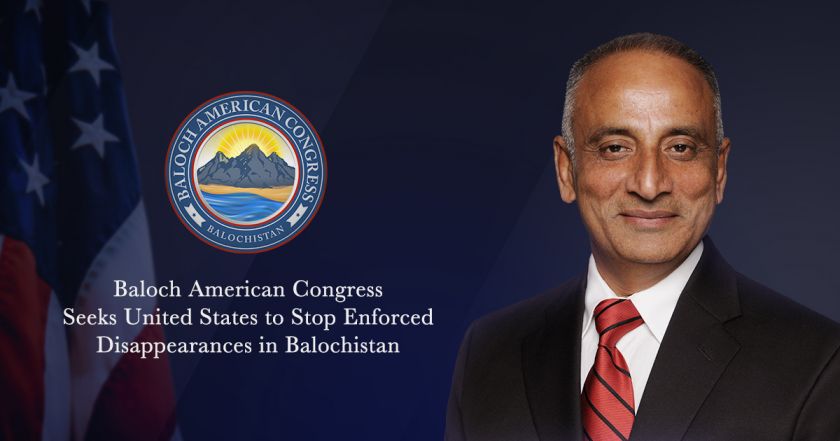 The Baloch American Congress (BAC) has announced a campaign to draw the attention of the U.S. government, lawmakers, and human rights defenders to the issue of enforced disappearances in Balochistan in Southwest Asia.
Dr. Tara Chand Baloch, president of the Baloch American Congress, said in a press statement Thursday since the U.S. has an abiding commitment to defending human rights and upholding the rule of law the world over, the BAC is writing to U.S. leaders to seek their help in ending gross human rights violations in Balochistan, areawise the largest southwestern province of Pakistan.
Dr. Tara Chand said, “Pakistan state security services such as the Southern Command of Pakistan army, Inter-Services Intelligence, Military Intelligence, and paramilitary Frontier Corps have been carrying out enforced disappearances in Balochistan with impunity.”
He said he is writing to the U.S. government, lawmakers, and human rights defenders to remind them the Leahy Law prohibits the U.S. from doing business with military-related entities involved in human rights violations.
Dr. Tara Chand said since the year 2005, upwards of 20,000 Baloch from different walks of lives like political activists, students, doctors, lawyers, singers, poets, artists, sportsmen, and common working folks have gone missing just for protesting Islamabad’s unjust treatment and demanding basic human rights.

“This gives Balochistan the dubious distinction of being third in the world in terms of the number of missing persons, following Syria and Sri Lanka,” the BAC statement said.

He said over the years, mutilated bodies of scores of the victims were dumped on the wayside and desolate places by the state security services in Balochistan; the fate of thousands remains unknown to this day.

Families of missing persons have been protesting for years in front of the press clubs in Quetta, Karachi, and Islamabad. These families have staged perhaps the world’s longest freedom march from Quetta to Karachi and Islamabad, some 1,350 miles, but to no avail.
“Meanwhile, new cases of enforced disappearances are being reported even now,” the statement concluded.
The DC-based Baloch American Congress was launched in November by Dr. Tara Chand Baloch, a former Baloch government minister, with the aim of drawing U.S. attention to the tsunami of human rights violations in Balochistan.
For more details please visit our website: www.bacongress.us
Follow us on Twitter and Facebook.
Source: Baloch American Congress