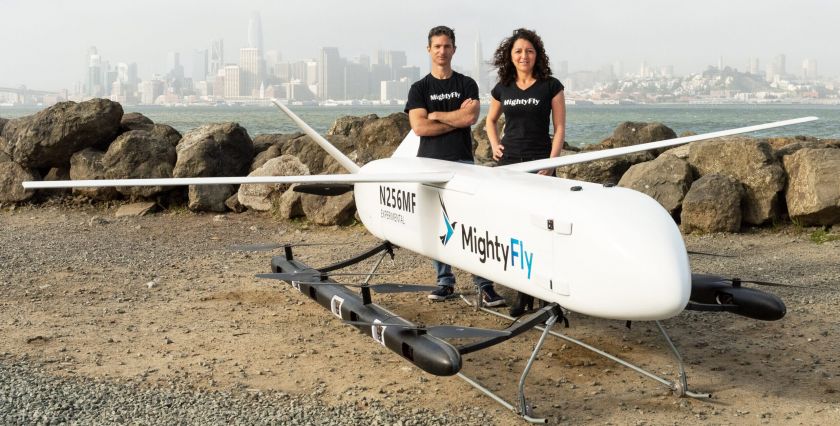 MightyFly, an autonomous air cargo carrier, announced today that it has closed $5.1 million in seed funding. The round includes investments from 500 Startups, At One Ventures, Global Founders Capital, Graph Ventures, and Halogen Ventures. The funding will be used to expand hiring, scale-up MightyFly’s fleet, and build the infrastructure required to support a global network of hubs.
“MightyFly marries economies of scale with autonomy to completely disrupt logistics, making quick, cost-efficient, and carbon-neutral cargo accessible to all businesses and all areas,” said MightyFly co-founder and CEO Manal Habib. MightyFly is the only female-led drone company designing and manufacturing its own drones to operate a logistics service. “For me, aerospace is more than a profession, it’s a passion—and a way to transform lives for the better.”
The MightyFly MF-100 is a hybrid-electric vertical take-off and landing (eVTOL) aircraft with a cargo capacity of 100 lbs., cruising speed of 150 mph, and range of 600 miles. It is approximately the size of a midsize car. A larger aircraft with a cargo capacity of 500 lbs. is planned. MightyFly aircraft are capable of making multiple deliveries during the same flight, increasing utilization and route efficiency.
“MightyFly’s range and payload are unprecedented in the expedited delivery space today. Most existing delivery platforms carry much lighter payloads much shorter distances. While many traditional carriers are slowly moving toward carbon-neutral and autonomous delivery, MightyFly is ready to take off. They have the ability to change how business is done,” said John Formisano, a retired FedEx executive, formerly VP of Global Vehicles, and advisor to MightyFly.
Safety is the first priority at MightyFly. The aircraft are built to the same standards as every commercial airplane in the sky and designed for double redundancy across all systems, with a failure tolerance that is even better than manned systems. MightyFly aircraft will broadcast Automatic Dependent Surveillance-Broadcast (ADS-B) in and out and will be in communication with Unmanned Aircraft System Traffic Management (UTM), as well as MightyFly’s own tower. Every MightyFly flight is supervised 24/7 by a human remote operator.
The MightyFly MF-100 has received a Special Airworthiness Certificate from the FAA, and test flights are being performed in California. The company aims to achieve FAA Part 135 certification, and airworthiness certifications in other markets, like Australia and Asia.
The company is currently expanding its hiring to further the development of its fleet and is seeking business partnerships for proof-of-concept delivery service operations.
About MightyFly
MightyFly is remaking the future of logistics via large autonomous cargo aircraft. We’re building patent-pending, autonomous, eVTOL aircraft with a cargo capacity of up to 500 pounds, range of 600 miles, and speed of 150 mph to provide rapid and efficient package transport for businesses and governments. mightyflying.com
Media Contact
Jenn Virskus
(517) 203-8341 jennvirskus@mightyflying.com
Source: MightyFly