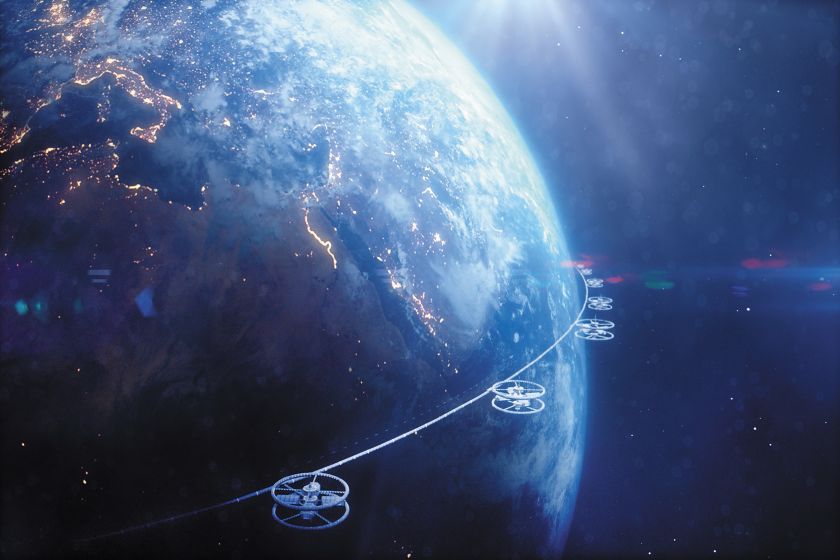 The scientist and engineer Anatoli Unitsky, founder of Astroengineering Technologies LLC,  suggests exploring space with the General Planetary Vehicle (GPV) operating on electricity. The project is under development by Unitsky’s team of engineers and could be implemented by 2045. The cost to go into space using GPV would be equal to a train ticket.
The GPV will deliver into orbit up to 10 million passengers and up to 10 million tons of cargo for one flight. The cost of servicing will be less than $1,000 for a ton. Meanwhile, for the SpaceX Falcon 9, the cost to launch a kilogram to the ISS is $2,720 — one ton will be about $2,720,000.
The GPV is a toroidal structure (like a big ring) several meters in diameter with two lengthwise channels isolated from the outside environment where a vacuum is maintained. The linear electric engines are located in the channels.
The ring is located on a specially equipped overpass encircling the planet. One of the linear rotors installed inside the ring is accelerated along the channel with the help of an external energy source and spins up around the planet at a speed exceeding the first cosmic velocity.
Due to centrifugal force, the rotor balances its weight and then tends to rise upwards, providing lifting force.
After leaving the atmosphere, the rotor switches over to the generator mode and the generated energy is used to spin up the second rotor in the opposite direction. The GPV body, to which the flywheel pulse is transmitted, begins to unwind up to the first cosmic velocity and rises into space, getting out of the gravitational pit.
The planet will be encircled with the Industrial Space Necklace “Orbit”, an industrial complex using the GPV to transfer hazardous industry from the Earth to the near-Earth’s orbit.
The project is at the R&D phase and looks forward to getting support from governments.
Unitsky has already implemented another game-changer technology in mobility. Unitsky String Technologies Inc. produces an ecofriendly mode of transport, which moves above the ground on a string rail and consumes a small amount of energy. Its cost is lower than that of the existing overpass transport, and its emissions are reduced by 2-5 times. It’s safer thanks to the movement at the “second” level. One of the first 15-kilometer transit systems was announced in Dubai.
Recently Anatoli Unitsky hosted in Belarus the International Scientific and Technical Conference “Non-Rocket Near Space Industrialization” where researchers involved in engineering and environmental sciences shared issues on how to make space accessible for humankind.
Media inquiries: info@unitsky.space
Source: Astroengineering Technologies LLC