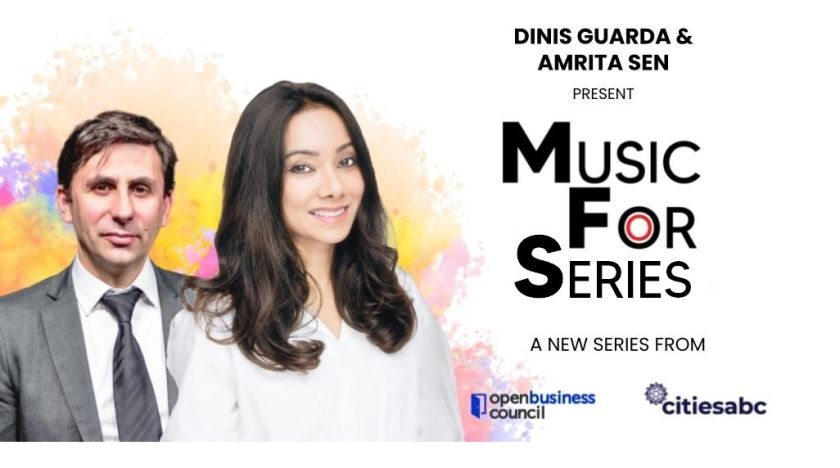 Music For is the new podcast between artist, designer and producer Amrita Sen and citiesabc and openbusinesscouncil founder and author Dinis Guarda. A collaborative work, the podcast showcases the power of music to improve our well-being and healing as well as Amrita’s exclusive ideas in terms of narratives from Indian Mythology. She aesthetically introduces a fresh perspective to the potentials of music in alleviating one’s inner self by taking an illustration of Buddha’s life. The podcast is available on Dinis Guarda YouTube Channel and major podcast directories.
Fascinated by the sheer cacophony of the ideas of well-being and mindfulness, Amrita shares the excerpts from her books on Buddha and her life experiences in music and arts. She points out that this had been the constant process of amalgamating writing with art. She creatively conceptualizes the life of Buddha and his wife, Vasundhara (or Dhara, as she fondly names her), through paintings and wall art, creating a mesmerizing plot of the entire narrative.
“For me, all that the ‘Buddha music’ really represents is the concept that you focus on real music, real songs that allow you to think, allow you to meditate, allow you to breathe, and at the same time allow you to understand all the collaboration it requires artistically to make something good. And that is what this Music For podcast is trying to synthesize.” – Amrita Sen.
In future episodes, the podcast series promises to create an illuminated sphere by welcoming many guests, submerging the audience in the sheer depths of mindfulness and well-being, achieved through music.
Originally from India, Amrita Sen is a US-based designer, singer, producer and business woman. Among her many achievements, Amrita performed at the 2009 Academy Awards with music legend AR Rahman. As an entrepreneur, Amrita creates original Indian-themed art on successful lines of fashion and home products and distributes it through her own personal brand, Amrita Sen Designs.
“Music For tells about the power of music to shape our minds and behaviours. Music is a powerful tool to improve our well-being and heal ourselves. Throughout the series, Amrita and very special guests will show the pivotal role of music not only regarding Buddhism but in other key topics of humanity. That’s the vision of this new Music For podcast,” said co-host Dinis Guarda, founder of citiesabc and openbusinesscouncil.
Music For podcast is available on Dinis Guarda YouTube Channel and major podcast directories.
Media Contact
Hernaldo Turrillo
VP Content ztudium
hernaldo.turrillo@ztudium.com
+447751667277
Source: citiesabc