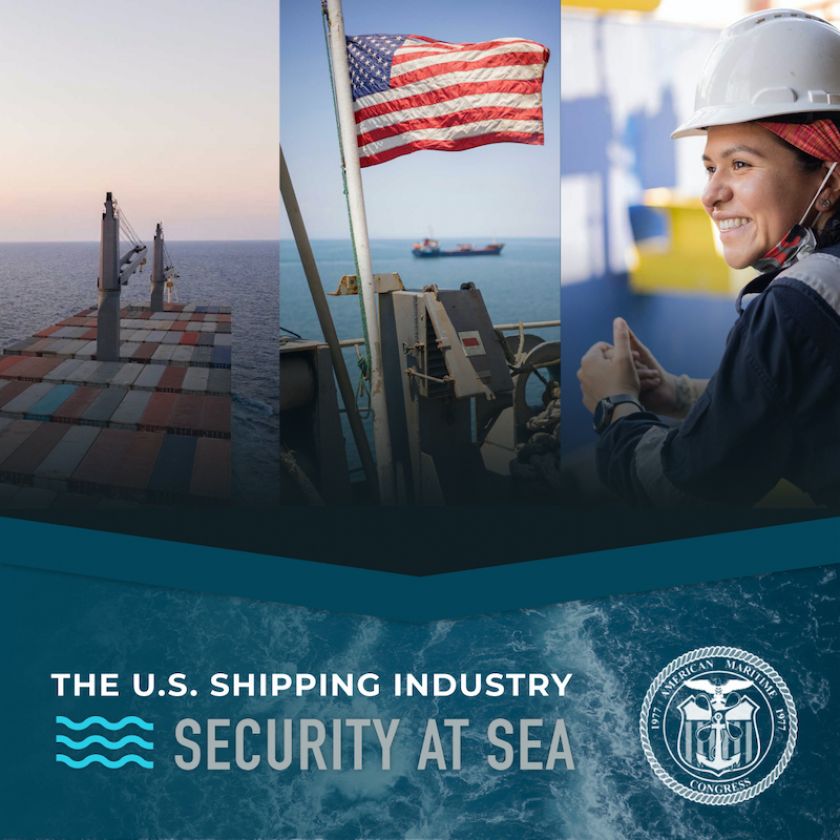 The American Maritime Congress (AMC) today launched a comprehensive campaign to raise public awareness about the key role the U.S.-flagged deep-sea shipping industry plays in our nation’s economic prosperity, national security and future well-being.
“We’re excited to launch this awareness campaign designed to draw attention to the value and importance of the men and women of the U.S. merchant marine and the U.S. companies that employ them,” said AMC President James Caponiti.
The campaign comes at a time when the U.S. portion of the maritime industry has decreased in size compared to its foreign competitors, even as the role of deep-sea shipping has swelled in importance to everyday Americans. Internal research that AMC has conducted also shows that many policymakers know little about the U.S. shipping industry’s significant role in our nation’s strategic security objectives, or about its significant impact on the economy.
AMC aims to reverse these trends by educating our communities and garnering increased support for the industry so that the industry can ultimately build a stronger fleet that will help move our nation further.
The campaign runs through the end of December 2021, in a multi-phase format focusing on reaching the wide swath of those in the nation’s capital that may never have given much thought to the U.S. shipping industry. It features illuminating digital, video and social media content that showcases the unique operations and contributions of major U.S.-flagged deep-sea carriers and the maritime labor working with them.
The initial focus will be on raising general awareness that the U.S. flagged carriers and American merchant mariners are perhaps the least visible component of the nation’s transportation and national security infrastructure.
As the campaign continues, the focus will shift from general awareness to a more granular level of education on the federal policies and programs that help sustain the Industry, including the Maritime Security Program, Tanker Security Program, Cargo Preference (“Buy/Ship American laws”) and the Jones Act.
AMC is presenting these impactful stories on a new website –  Security at Sea (https://americanmaritime.org/security-at-sea) — which takes a deep dive into three main pillars of the U.S.-flagged deep-sea shipping industry.
The Economic Impact pillar of the campaign highlights the fundamental impact that the industry has on job growth, investment and economic development. It notes that unlike foreign-flagged ships, U.S. carriers ensure the reliability of U.S. trade even amid political tensions, supply chain disruptions and cyberattacks.
The National Security component of the campaign demonstrates how U.S.-flagged carriers play a critical role in supporting our troops abroad by remaining ready to defend our interests and help deter potential conflict. Additionally, the industry plays a role in protecting our National Security by controlling much of our trade, an often overlooked, yet vital, role.
The Future Security pillar provides insight into the U.S. shipping industry’s stringent environmental and safety standards that help preserve our planet for future generations. It also underscores the important work of unions like the Marine Engineers’ Beneficial Association (M.E.B.A.), which safeguards the future prosperity of American families, communities and the national economy.
“With the launch of a campaign that highlights our role to this nation — in times of both peace and war — we want to break through the noise and help the average American better understand and support our complex and crucial service,” M.E.B.A. President and AMC Board Chair Adam Vokac said.
About American Maritime Congress
The American Maritime Congress is a research and educational organization dedicated to informing the public, the media, and legislators in Washington on issues and policies affecting the U.S.-flag merchant marine and the maritime industry.
For over 40 years, AMC has been a leading advocate for responsible maritime policy, an effective commercially operating fleet, and a level playing field to ensure the success and continued viability of a U.S.-flag maritime industry. The organization advocates the critical importance of having a strong U.S. Merchant Marine to meet the challenges and uncertainties of sustaining ocean-going trade in a complex, global economic environment.
Contact
Fair Kim
Policy Director, AMC
Phone: 202 347 1550
Email: fkim@americanmaritime.org
Source: American Maritime Congress