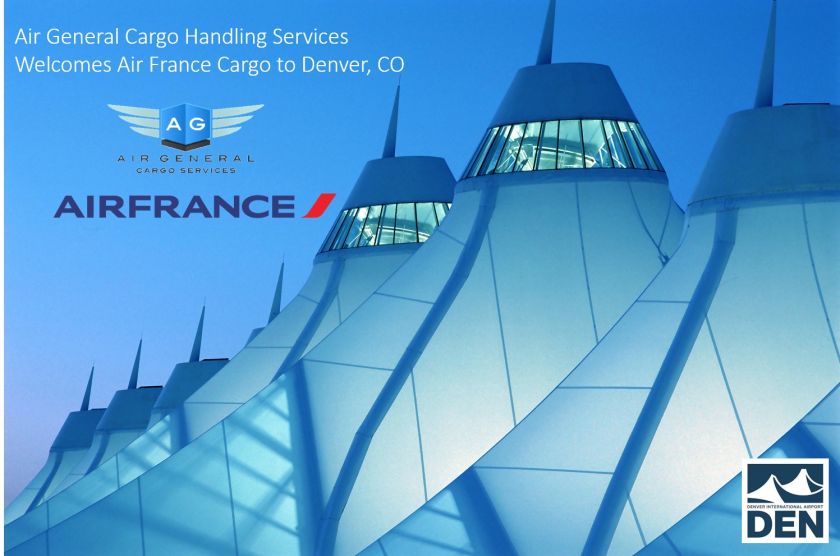 Air General, Inc. (Portsmouth, NH), has been awarded a ground handling contract for cargo handling services with Air France (Paris, France) at Denver International Airport, Denver, CO (DEN), beginning July 2, 2021.
Air France will operate seasonally with three flights a week during the summer months from Paris-Charles de Gaulle direct to Denver International Airport. Air France is a pivotal player in the international air cargo space, having over 1.2 million tons of cargo flown annually worldwide.
Air General, in business for 60 years providing excellence in cargo handling services, has been operating in Denver since 2000. Air General operates 17,000 sq feet of warehouse and office space and has cargo handling contracts with seven additional carriers, including three international wide-body carriers and four narrow-body domestic carriers.
Air General and Air France are looking forward to this partnership at the ever-growing Denver Metropolitan area.
Air General & Air France:
Air General has a long and successful history with Air France, beginning in 1978. Air General again began to handle Air France throughout the 2000s in Boston, Orlando, and Newark before Air General left those markets in the late 2000s.
The return of Air France and Air General’s partnership has been eagerly awaited, and Air General looks forward to providing its proven results and effective cargo handling services that international wide-body carriers like Air France have come to expect.
About Air General:
Air General, founded in 1961, and continuously operating as a family business for over 60 years, is a U.S.-based Airline and Ocean cargo/freight handling and warehousing company Headquartered in Portsmouth, NH, with 34 facilities spread throughout the United States, over 31 Airlines handled, and over 700 expert employees, we are one of the premier ground handling companies based in the US. The company is privately owned, operated, and founded in 1961.
Source: Air General, Inc.