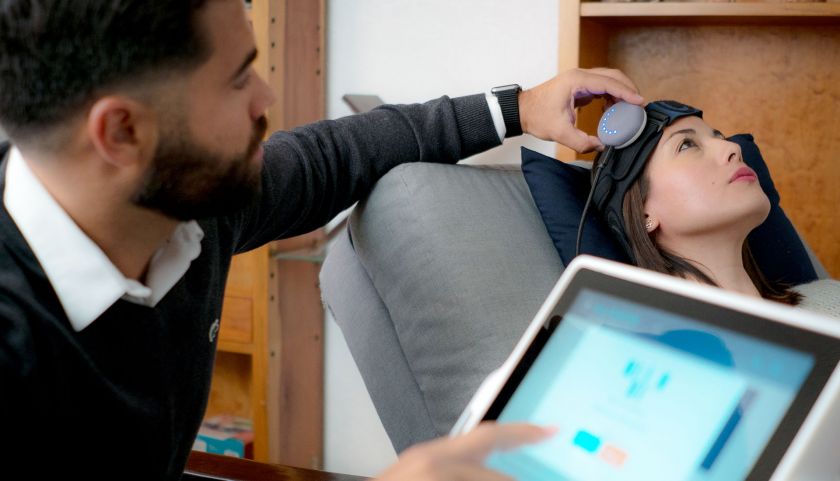 Today, the results of a recent pilot clinical trial, funded by neurotech company Actipulse Neuroscience, have demonstrated that its non-invasive intervention devices, using Fast Gamma Magnetic Stimulation (FGMS), can be safely administered to patients with mild Alzheimer’s disease.
Actipulse Neuroscience’s proprietary transcranial neuromodulation is based on previously developed FDA-approved technology, which applies high-frequency and low-intensity magnetic pulses directly to the skull using a wearable headset.
The details of this randomized, double-blind, sham-controlled study were published in the leading industry journal Frontiers in Neurology. It states that 34 participants, with mild cognitive impairment or mild Alzheimer’s disease, were split into two groups. Each of them received either active or sham FGMS over the left prefrontal dorsolateral cortex twice a day for six months. After this period, the participants were tested for adverse effects, cognitive activity, functionality, and depression.
The results show that FGMS was adequately tolerated by most of the subjects, with only five presenting any kind of adverse effects. This concludes that FGMS applied in this way is a viable intervention that can be safely used at home, without healthcare provider supervision.
Since 2003, no new drug with clinically proven results has been approved for the treatment of Alzheimer’s disease, and there have been more than 400 failed clinical trials. But the success of this first pilot trial, proving the safety of this neurostimulation device, means that Actipulse Neuroscience will be able to move onto the next phase. A second trial, focusing on efficacy, will take place in the first quarter of 2022.
This is part of Actipulse’s long-term goal of providing accessible worldwide state-of-the-art technology that can be administered at home, without a healthcare provider, offering patients suffering from neurodegenerative diseases more independence over their health.
“We are extremely happy with the results from this safety trial and are eager to start the efficacy study with the hope of finding a new method to slow disease progression,” said Adrien Châtillon, Chief Executive Officer and co-founder of Actipulse Neuroscience.
About the company
Actipulse Neuroscience is a pioneering neurotech company specialized in the research and engineering of Non-Invasive Brain Stimulation technologies for the at-home treatment of neurodegenerative disorders and conditions.
The company’s mission is to be the golden standard of neuromodulation technologies in the next five years and to become an integral part of the treatment of millions of patients suffering from neurodegenerative conditions.
ContactName: Daniela RestrepoPhone: +573176474813Email: daniela.restrepo@publicize.co
Source: Actipulse Neuroscience