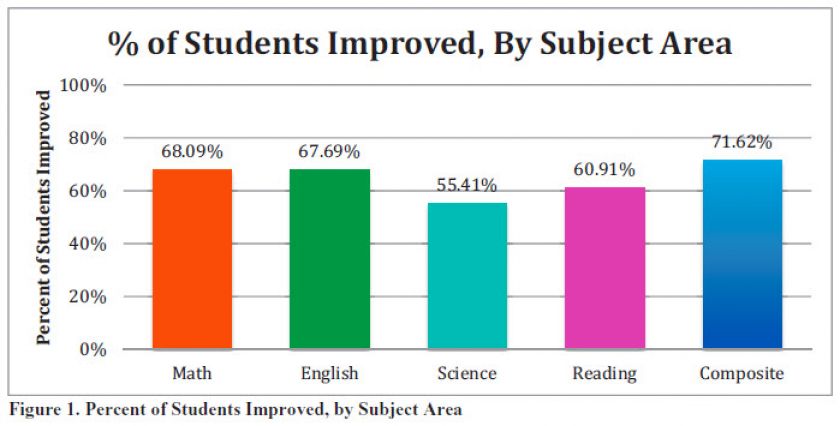 “Rigorous aggregate level t-tests in which pre- to post- score changes were assessed demonstrated that three of the four subject areas and the composite average saw statistically significant positive score changes at the critical p-value of .05. The only non-significant result was for Science. This threshold effectively gives us 95% confidence that the results observed in this sample would generalize to the population of interest (i.e., all High School Juniors),” said Dr. Jake Hoskins of h-squared Analytics, LLC.  The research concluded that similar rates of improvement are shared among students from different genders, ethnicities and school quality.
Newton County High School’s Principal, Dawn Hollingsworth, shared, “We are immensely proud of the results that our students achieved after preparing with Jumpstart Test Prep. We saw a remarkable average increase of 3.48 points for 75% of those with a prior score in English!”
School officials from Desoto School Districts Horn Lake High School also shared their excitement from the results earned by their students, with 69% realizing an average gain of 3.17 points over their prior best ACT score in English. Mazie Lamb, assistant principal at Horn Lake High, commented, “Jumpstart Test Prep provided a thorough and solid review of English grammar skills that students may not have used daily since middle school. It was a refresher course for students and a reminder of their basic grammar rules,” Lamb continued, “The video modules were presented in a manner that the classroom facilitator did not have to be a master of English content to help the students through the program. Any teacher could facilitate the implementation of the Jumpstart program. We are very proud of the success of our students, and we know that each of their futures is very bright.”
Horn Lake juniors were recognized for their improvement results and shared their thoughts about the program. Graycie Pegram, who achieved an improvement of 10 points in her English subscore, increasing from a 20 to a 30, commented, “Jumpstart Test Prep made the difference for me because it reviewed a lot of material that I haven’t seen in a long time, and it made it easier to remember things I learned during middle school. Jumpstart used realistic example sentence problems to help me prepare for the ACT and that made a big difference.”
Teachers at pilot schools proctored the streaming video-based review in their classrooms and reinforced the program by ensuring student understanding and providing additional practice questions before the exam.
Marisa Redmond, one of the College and Career Readiness teachers at Brookhaven High School who taught the Jumpstart program, says, “From a teacher’s perspective … I was blown away by how great they did. The program is simple to use.” Coach Aaron King also led the Jumpstart Review. “It was a significant advantage for our students to have had Jumpstart Test Prep at their disposal. I told them every day that they didn’t realize how lucky they were to be provided with this tutorial review program. Jumpstart is an important key to student success on this important exam.”
On her third ACT® attempt, Brookhaven High School junior Kaytlin Humphreys improved her math sub-score +7 points and improved her composite score +2 points over her two best prior attempts. She tells future students, “It is a good review of things I’ve learned but forgotten. Pay attention. It [Jumpstart Test Prep] does actually help so just try your best.”
Placing the success these schools experienced into perspective was company Co-founder & CEO, Sha Walker, who shared some of those key elements.
“The schools involved in this pilot faced enormous challenges this past spring with COVID outages and a statewide ice storm the week before the planned test day that delayed testing for many schools. Those who were able to implement the Jumpstart subject area reviews into the school’s master schedule so their juniors could complete subject area reviews within three or four weeks before test day as prescribed were able to realize impressive Average score gains over prior best scores,” said Walker.  “In order to be fully prepared, students need a complete review of the content they will see on the ACT®, along with all the tips, test-taking strategies and realistic question practice that we provide, all delivered and reinforced by educators in a near time frame to test day,” Walker continued. “We conducted several site visits at each school to help with planning and faculty development, introduced student improvement contests and led ‘ACT Pep Rallies’ to help our partner educators motivate students to do their best.”
Jumpstart Test Prep has constructed an online review program based on over 50 years of work by Mississippi’s 19-year STAR teacher Hall of Fame inductee: the legendary educator and tutor Dot McClendon.
“As a teacher at The Mississippi School of the Arts and several other schools during my career, I was able to help guide the preparation of students in person,” said McClendon. “Now, through our online, on-demand video review, students in classrooms around the country, around the breakfast table or on the couch at home, are able to benefit from our approach.”
Walker and McClendon cite the top three competitive distinctions of Jumpstart Test Prep:
School administrators utilized an online dashboard reflecting the video module completion progress of teachers assigned to proctor the review and/or individual student progress.
More information on Jumpstart Test Prep and the complete analysis can be found at www.jumpstarttestprep.com
More information on h-squared Analytics, LLC can be found at www.h-squared-analytics.com
Media Contact: Hannah MasonEmail: Info@jumpstarttestprep.com
ACT® and ACT WorkKeys® are registered trademarks of ACT, Inc. Jumpstart Test Prep is not affiliated with or endorsed by ACT, Inc.
Source: Jumpstart Test Prep