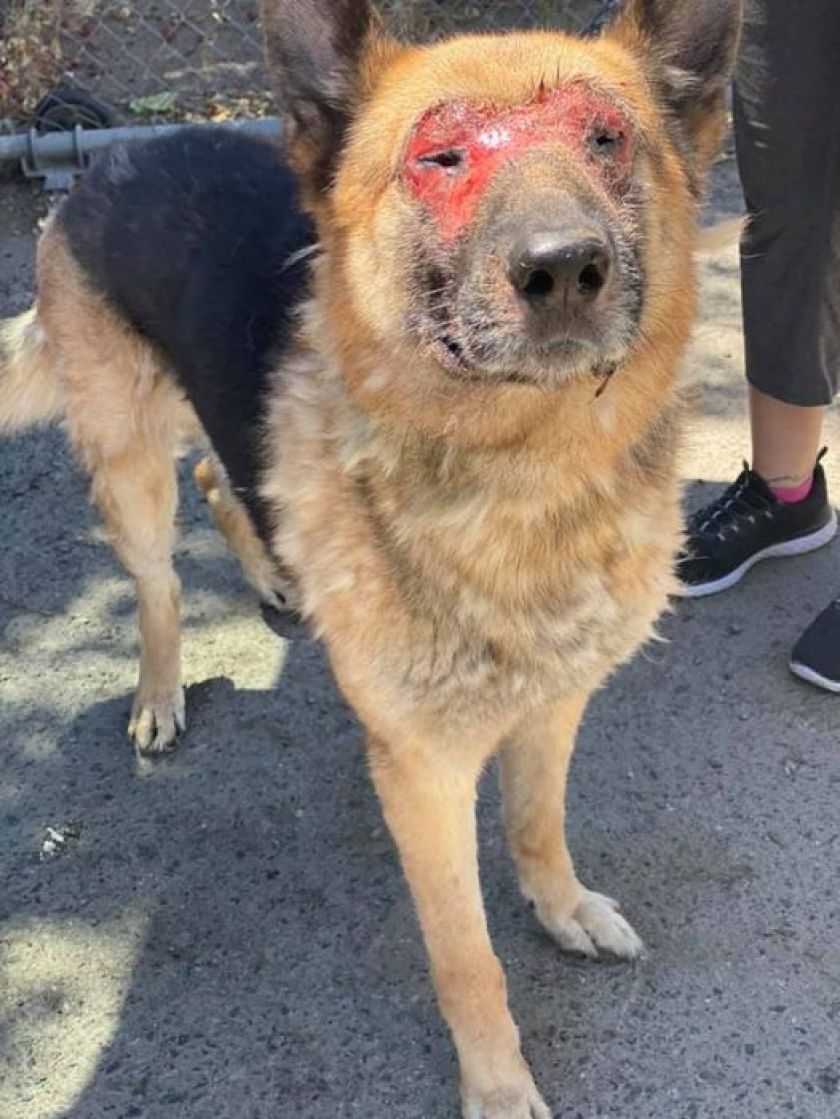 Southern California-based animal rescue group German Shepherd Rescue of Orange County is offering a $2,500 reward for information leading to the arrest of an individual responsible for torturing a 3-year-old German Shepherd dog that the group has named Oliver. The rescue group learned that Oliver had been picked up by Fresno Humane suffering from second-degree burns to his eye area and immediately rushed to his rescue. Oliver is currently being treated at an Orange County veterinarian, who described the injuries as “horrific”.
According to Fresno Humane representatives, when Oliver was picked up near Garfield and Menlo on June 14, his eyes were crusted closed and he could not see where he was going. Around his eyes were raw and oozing wounds that were causing him tremendous pain. Efforts to determine what substance caused the wounds have been unsuccessful, however, bear spray and pepper spray have been ruled out by the treating veterinarian. Due to the position of the wounds, an accident was ruled out as well.
“As rescuers, we see too many sad cases, but Oliver’s case stands out because of the intentional cruelty that someone inflicted on him,” says Maria Dales, Executive Director for German Shepherd Rescue of OC. “We want someone to be held accountable for this, and we are hoping that the reward money will help Animal Control apprehend the individual responsible. We’re asking the public to share any information they may have about Oliver’s previous owner or who may have done this to him. Perhaps this was a child’s prank, perhaps it was someone’s horrible idea for deterring a dog—we just don’t know. We just know that Oliver suffered needlessly.”
While Oliver’s skin may heal, it’s unknown what emotional scars he will bear, or whether his vision will be intact. The rescue is providing him with hospital care while he recovers.  Per Dales, “Anyone who has any information about who did this to Oliver is urged to contact Fresno Humane at info@fresnohumane.org, or call 559-600-7387 for investigation. Your tip can remain anonymous.”
###
CONTACT: Maria DalesEMAIL: mdalescomm@aol.comPHONE: 714-504-3443WEB: gsroc.org
Source: German Shepherd Rescue of Orange County